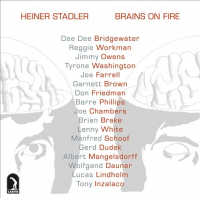 One of the most exciting reissues of the first quarter of 2012 is composer and pianist Heiner Stadler's pioneering Brains on Fire, originally released in 1973. The two-CD reissue adds three lengthy, previously unreleased tracks and informative and well-researched liner notes by critic Howard Mandel.

Interestingly, Stadler occupies the piano chair only on five of the eight pieces, recorded over a seven-year span in a variety of settings varying from vocals and bass duet to big band. His bold style and versatility as a composer, arranger and instrumentalist is showcased throughout the album regardless of whether he is actually hitting the keys or not.

The sparse "Love in the Middle of the Air" is over 20 minutes of Dee Dee Bridgewater vocalizing on the theme of taking a leap of love and asking to be caught, backed by Reggie Workman's haunting bass, which alternates between bowing and picking the strings. Workman creates not only an ambience but also an entire accompaniment to the vocalist, exhibiting not only his own virtuosity but also the breadth of an instrument often unjustly relegated to a supporting role. Bridgewater's highly emotive and theatrical singing is much different from her more recent, highly polished interpretation of standards, and has a certain youthful and raw, yet engaging, quality. Even though Bridgewater and Workman are the stars of the song, Stadler's unique imprint, like a director's, is all over its construction and presentation.

The other extreme, in personnel at least, is the big band version of "Bea's Flat," originally written for trumpeter Chet Baker by Russ Freeman and arranged by Stadler into a kaleidoscope of tonal colors. It is the only tune not penned by him. It features a sound reminiscent of bassist Charles Mingus Jazz Workshop, especially on the group interplay and the ensemble's interaction with trombonist Albert Mangelsdorff's loops of improvisations that push the boundaries of the original music in an atonal, growling, call and response fashion. By contrast, Mangelsdorff's intrepid trombone stands alongside the contemplative and restrained cornet of Manfred Schoof.

One of the great revelations of this rerelease is the rediscovery of Tyrone Washington. The tenor saxophonist burst on to the jazz scene on pianist Horace Silver's The Jody Grind (Blue Note, 1966) and his own Blue Note date, Natural Essence (1967). By the time of this collaboration with Stadler, he was migrating more towards soul-jazz- fusion. Here, however, he affirms his avant-garde credentials with urgent honks and screeches on the intensely melodic and delightfully cacophonous "No Exercise," and his John Coltrane-esque, simultaneously bluesy and free, solo on "Three Problems." Washington's skills as a flautist are also on display as he plays a soaring storm of notes on "USC." Stadler's angular piano, with its carefully placed notes, guides Washington and other bandmates effectively through the intricacies of his compositions.

Bridgewater and Washington are not the only mainstream jazz artists coaxed into more adventurous terrains by Stadler. Garnett Jnr Brown also plays a freer version of his soulful staccato trombone heard on discs by Jack Wilson and Booker Ervin and inside/outside trumpeter Jimmy Owens features a warm, boppish but edgy, extemporization on "The Fugue No. 2."

Polish born, German raised and US based, Stadler is one of the unappreciated giants of improvised music. This reissue will go a long way in helping shed light on his talents. No amount of written description can replace the experience of actually listening to his work with an open mind and an adventurous ear.

Tracks: No Exercise; Three Problems; Heidi; Bea's Flat; Love In The Middle Of The Air; U.C.S.; All Tones; The Fugue No. 2.

No Exercise; Three Problems; Heidi; Bea's Flat; Love In The Middle Of The Air; U.C.S.; All Tones; The Fugue No. 2.