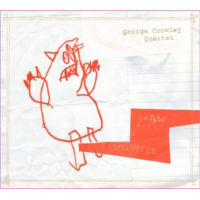 There are times on Paper Universe, George Crowley's debut album, when the young saxophonist and composer sounds like he's been sitting by the side of Coleman Hawkins or Lester Young. There are times when he flies out of the speakers like he invented hard bop. Then a few minutes later he's creating long, flowing melodic lines with a more contemporary edge. It's impressive stuff from an imaginative young talent.

Crowley and Downes open "Marty McFly," a tune with the urgency and atmosphere of George Russell's New York, N.Y. (Decca, 1959), featuring some joyously up-tempo unison playing before Gourlay and Maddren trade a few phrases. Crowley's quieter and more thoughtful side comes to the fore on the contemplative "Still Life" and on "B Flat Man," with its echoes of John Coltrane. It's there, too, on "Demerera Days," with Maddren's light, darting drums and Downes' fluid piano solo complementing Crowley's warm, romantic tone.

Crowley's unaccompanied tenor opens the beautiful slow ballad, "Embracing Air," which also features Gourlay's deep, rich double bass. Crowley's performance, mostly in the tenor's mid to upper register, is both emotionally engaging and a masterly demonstration of control and precision. On Kit Downes' "Bela Lugosi," Crowley steps back a little to let the rhythm section take the spotlight. When he does step forward, he shows a more aggressive approach, the rougher edge to his tone keeping with the slightly spooky mood created by his band mates.

The range and variety of Paper Universe suggests that Crowley has yet to decide on his ultimate musical path, but it also shows that he has the ability to go in whichever of these directions his mood takes him. Crowley has the potential to make a major impact.