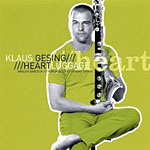 Sometimes a musician's associations are so high profile that it's easy to overlook his own work as a leader. Seeming to appear out of nowhere on British vocal legend Norma Winstone's sublime Distances (ECM, 2008) and Tunisian oudist Anouar Brahem's equally chamber-centric The Astounding Eyes of Rita (ECM, 2009), Klaus Gesing is, in fact, an established and active player. Heartluggage isn't the saxophonist/clarinetist's first album as a leader, but it's as good a place as any to discover how, while leaning towards the chamber side of the jazz equation, Gesing is capable of greater fire and passion than his more subdued ECM recordings would suggest.

Gesing chose a crack group for this 2006 release, including two then up-and-coming players, now leaders in their own right and garnering plenty of acclaim. Pianist Gwilym Simcock's star has been on the ascendancy since emerging as a member of Acoustic Triangle and saxophonist Tim Garland's Lighthouse Trio, but he's been on an equally strong upward trajectory as a leader, with Blues Vignette (Basho, 2009) a sophomore effort that affirmed his strengths as solo performer, composer and band leader. Percussionist Asaf Sirkis, Simcock's Lighthouse Trio partner, is another rising star for work with outspoken saxophonist Gilad Atzmon, but his own gradually growing discography—most recently the guitar-driven The Monk (SAM, 2008)— asserts a compelling writer and performer as at home with color as he is assimilating rhythms from across the globe.

While the chemistry between Simcock and Sirkis was still fomenting at this time, it remains an unmistakable presence, as is their shared simpatico with bassist Yuri Golubev (a member of Simcock's current trio) and, of course, Gesing, who contributes all but two of Heartluggage's nine tracks and plays with a stunning combination of vitality and understated virtuosity, whether it's on soprano saxophone, bass clarinet or flute. A rubato arrangement of the traditional "Choral," begins gently, but builds in intensity; Gesing's bass clarinet a visceral yet lyrical presence. John Coltrane's classic "Giant Steps," generally considered a rite of passage for players looking to prove their ability to navigate changes, is nearly unrecognizable in the inherent classicism of Gesing's reharmonized ambiguity, and feels more closely aligned to the aesthetic of artists like Bobo Stenson and John Taylor than the more ego-driven approach taken by many.

Gesing's writing ranges from the buoyant, Oregon-esque "Force on Fours" to the balladic impressionism of "To the Missing." With an unconventional emphasis on horns that are usually "doubling" instruments for most reed players, Gesing brings a unique tonality to this standout modal track, occasionally overdubbing his two horns but ultimately delivering a soprano solo of unbridled power and immaculate promise.

The entire group, in fact, plays as if its life depended on it, making Heartluggage one of those hidden gems that commands attention from the get- go. With Simcock and Sirkis on the ascendancy, Heartluggage is a more fully rounded introduction to Gesing than his two ECM appearances; a writer, player and bandleader belonging in the same distinguished strata of his band mates on the vanguard of jazz to come.