By IAN PATTERSON
December 20, 2020
Sign in to view read count 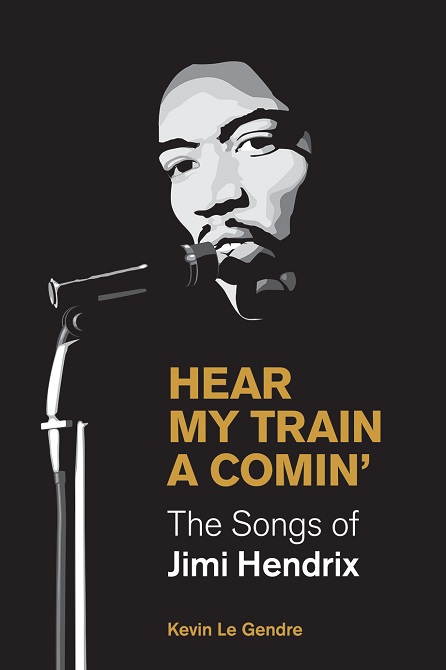 Few artists have burned as briefly and brightly as Jimi Hendrix, the Afro-American guitarist and singer who set the late 1960s alight with his virtuosity and showmanship. Fifty years after he died in 1970, aged just twenty-seven, Hendrix continues to influence myriad musicians, and inspire biographers, film-makers and artists alike.

For author Kevin Le Gendre—one of the UKs leading jazz journalists and black music historians—Hendrix' renown as a guitarist has tended to overshadow his considerable attributes as a songwriter. With forensic fervour Le Gendre addresses this historical imbalance, song by song, analysing the craftsmanship, influences and innovations behind the music.

As such, this is not a biography of Jimi Hendrix—plenty are the books that have delved into Hendrix' life already—but rather, a musical appreciation. That said, Le Gendre gleans a remarkable amount about Hendrix' psychological make-up by placing his songs under the microscope, revealing in the process just how open-minded Hendrix was in matters of music. To call Hendrix a rock musician, the author suggests, is to sell him short.

The elements of R&B, soul and rock 'n' roll that Hendrix channelled in his songs reflected his time on the Chitlin' Circuit in the bands of the Isley Brothers and Little Richard. The blues was a major influence, so too were trailblazers like The Beatles and Cream, not to mention the ragas of Ravi Shankar. But that was only part of it. As Hendrix himself once said: "I like things from Bach to Roland Kirk."

Hendrix jammed with the great jazz multi-instrumentalist Rahsaan Roland Kirk, with "Little" Stevie Wonder, Buddy Guy and many others. The jamming culture, stresses Le Gendre, is hugely significant in Hendrix's story, its informality and spontaneity an antidote to the rigidity and constraints that Hendrix had endured as a sideman with the R&B and soul stars of his formative years. The contrast between the image of Hendrix as a suited-and-coiffured sideman with the Isley Brothers—dutifully executing synchronized Motown steps—with that of Hendrix the bohemian fashionista a few years later, simulating sex with an amplifier, is indeed a striking one.

Yet as Le Gendre points out, Hendrix was also something of a perfectionist in the studio, insisting on multiple retakes of his own and bassist Noel Redding's lines: "Therein lies a fascinating duality in Hendrix' approach to conceiving and making music," the author states. "Spontaneity and micro-management came to co-exist."

It wasn't the only duality that defined Hendrix. For Le Gendre, Hendrix the singer-songwriter was just as important as Hendrix the guitarist. The fact that Hendrix recorded vocal and instrumental versions of several of his songs suggests that "the place of the guitar was not set in a clear hierarchy in his mind..." the author posits. Dissection of Hendrix' lyrics—where the figure of the gypsy frequently recurs— reveals what the author describes as Hendrix' sense of rootlessness, his cynicism and anti-authoritarianism. Indeed, a picture emerges from Le Gendre's unpicking of Hendrix' lyrics of a man deeply conflicted.

Pop musician of the three-minute radio hit or avant-garde blues artist who was equally at home crafting 15-minute-long sonic adventures, Hendrix comes across in these pages as an experimental artist who was always searching for new sounds.

Placing Hendrix's three studio albums under the microscope, Le Gendre underscores the importance Hendrix placed on the studio and on the technology of the day to sculpt his songs. Much of Hendrix' inspiration in this regard came from The Beatles and Cream—bands that Hendrix greatly admired. In the studio, Hendrix found an empathetic technical partner in producer Eddie Kramer, who Le Gendre credits for helping Hendrix shape the sounds the singer-guitarist imagined.

Fascinating insight into the sonic workings of the left-handed Hendrix' upside-down guitar—and its unusual tuning—comes from Roger Mayer, an audio engineer who built pedals and accessories for the guitarist. Hendrix' technique, or rather techniques, are what really set him apart from other guitarists of the day: his artful manipulation of the pedal; his blurring of rhythm and lead guitar lines; his innovative use of the thumb; the hard shaking of the guitar neck; the way he used vibrato and volume manipulation; his innovative use of tremolo, and interestingly, the way Hendrix used the giant speaker stacks on stage to affect the quality of his tone.

The rough, adulterated edge to Hendrix's playing—particularly, though not exclusively in the live arena—placed Hendrix firmly in the blues tradition. There were, however, more colors than just the blues in Hendrix' rainbow of sounds, the author noting Hendrix' ..."ability to draw sweepingly from the rich database of black music in America..." whilst adding his own highly distinctive vocabulary.

His bandmates in the Jimi Hendrix Experience also brought their respective influences to the mix. Noel Redding hailed from a rock background, while drummer Mitch Mitchell was schooled in R&B and jazz. All music, it seems, was fair game. Le Gendre heralds the period as a revolutionary time in black music, where James Brown's politicized funk, and the changing faces of rock, soul, jazz and R&B all fed off each other. It is little wonder, the author intimates, that Hendrix, so open to new sounds, should produce music beyond facile categorisation.

Le Gendre also challenges the not uncommon notion that The Band of Gypsys—with Buddy Miles and Billy Cox—was Hendrix' embrace of a pointedly more black music, given, he argues, that funk, blues, soul and R&B had always been part of the Jimi Hendrix Experience's DNA.

Having examined the music that influenced Hendrix and the music he produced, Le Gendre dedicates the final part of the book to Hendrix' legacy. Numerous are the bands and musicians who owe a debt to Hendrix, not the least of whom was Miles Davis. In his autobiography Davis acknowledged taking great inspiration from Hendrix' African-American grooves and his brand of blues guitar.

Other heirs to Hendrix, in spirit if not exactly in sound, include James Blood Ulmer, Sonny Sharrock Vernon Reid, Tony Remy and David Murray, the latter who started out on guitar—inspired by Hendrix—before switching to saxophone. More overtly, artists such as Lenny Kravitz and Prince have carried on Hendrix' mantle, while his songs have been interpreted by a wide range of musicians of various stripes. Hendrix, as revolutionary as he was, comes across as part of a historical continuum.

Central to Le Gendre's examination of Hendrix' music is the role of the blues. Immutable tradition or a dynamic force? This is the question, the author states, that Hendrix leaves us to ponder. For Le Gendre, Hendrix' "genius was to see himself of and beyond the blues, to realize its restorative power and mutative energy, its position as a launching pad for what has not yet been named."

As enlightening as it is provocative, this original study positions Hendrix firmly within black music traditions, yet resolutely outside any categories other than avant-garde. Engagingly written and authoritative, Le Gendre's Hear My Train A Comin' should take its place alongside Charles Shaar Murray's Crosstown Traffic: Jimi Hendrix And Post-War Pop (Faber and Faber Ltd, 1989) and John McDermott's Jimi Hendrix Sessions: The Complete Studio Recording Sessions 1963-70 (Little, Brown and Company, 1995) as one of the essential guides to Jimi Hendrix.