As the drummer in the Jimi Hendrix Experience, Mitch Mitchell was one of the greatest and most influential rock drummers of the 1960s. Mitchell's style was a blend of the abandon of someone like Keith Moon, with the jazz complexity of an Elvin Jones or a Joe Morello. While no one, including Mitchell, could match Moon for sheer rock power, it's also true that Mitchell had the technique to handle some rhythms and patterns that were beyond Moon's abilities. Mitchell was drummer on all of the Hendrix Experience's recordings and some of his post-Experience solo outings, and was still in his touring band when Hendrix died in September 1970.

Mitchell was a former child actor who had starred in the BBC children's television series "Jennings" before he was even in his teens. By the early 1960s he was concentrating on his drumming, and gained experience in bands such as Pete Nelson and the Travellers and the Coronets. He also started doing some session work, and was a member of the Riot Squad, who had about a half-dozen soul-rock singles in the mid-1960s without getting a hit. He played on some of the Pretty Things' second album, Get the Picture. He was considered for the permanent drum seat in the band when Viv Prince left, but passed over in favor of Skip Alan, whom the Pretties felt to have a more suitable personality.

Mitchell played with Georgie Fame and the Blue Flames during 1965 and 1966, but was fired in October 1966 when the lineup disbanded. The day after the firing, Chas Chandler invited him to audition for the group being formed around Jimi Hendrix. Mitchell beat out a lot of top young talent in London, including the other finalist, Aynsley Dunbar. Chandler later said that, unable to make up their minds, he and Hendrix tossed a coin, the flip coming out, fortunately for everyone concerned (except Dunbar), in Mitchell's favor. Mitchell was not a mere sideman to Hendrix, but an important collaborator. Always changing rhythms, never predictable, he was also flexible enough to bounce off and respond to Hendrix's own original solo lines. This was evident on the very first singles and the trio's first album, Are You Experienced?, as can be heard on the thrilling drum parts on tracks like "Purple Haze", "Hey Joe", "Fire," "Foxy Lady","Third Stone from the Sun," "I Don't Live Today" and "Manic Depression." Axis: Bold As Love produced such great drum tracks as "Little Wing" "Castles Made of Sand", "Wait Until Tomorrow" and many more.

The Jimi Hendrix Experience as originally formed -- Hendrix, Mitchell, and bassist Noel Redding -- played their last show in mid-1969. There followed a confusing period in which Hendrix was obviously unsure of where to take his music and who to bring along for the ride, or perhaps even whether he wanted a permanent band lineup of any sort. Mitchell played behind Hendrix at his famous Woodstock performance, but then Hendrix started playing and recording with the Band of Gypsies, with Billy Cox on bass and Buddy Miles on drums. the Band of Gypsies didn't go smoothly, and the original Experience was re-formed in early 1970, but fell apart almost immediately. By the spring of 1970, Hendrix was playing with Cox on bass and Mitchell on drums. Mitchell has written that Hendrix, after finishing a strenuous tour in September 1970, wanted to keep working with Mitchell, a different bass player than Cox (possibly Jack Casady or Jack Bruce), and other musicians, possibly including the Brecker Brothers and Motown players. Hendrix died before any plans were made. Mitchell, unfortunately, has rarely recorded since, a shame as he obviously had the talent to work with top- flight rock and perhaps jazz and experimental musicians.

Some revisionist historians have contended that Mitchell and Redding were White faces hitched to Hendrix by pop-conscious management, and that Hendrix's heart lay with Black musicians who were closer to the guitarist's blues and soul heritage. Looking at the available evidence, however, it seems impossible to conclude thatHendrix was merely putting up with Mitchell because of outside pressures that prevented him from collaborating with Black musicians. Mitchell, ultimately, was the musician with whom Hendrix had the most important and sustained creative relationship, out of the many people that Hendrix led or supported, onstage and on record. With John Platt, Mitchell wrote a memoir of his Hendrix years, Jimi Hendrix: Inside the Experience), recommended for its first-hand perspective and emphasis upon the musical cornerstone of the Hendrix legend.

When Jimi Hendrix ignited his guitar and the public imagination at Monterey in 1967, Mitch Mitchell provided the drum rolls. For a couple of years Mitchell's reputation grew with that of the Jimi Hendrix Experience; then Hendrix went on to form the Band of Gypsys, and the English drummer was left on his own. Mitchell's career came full circle, with a twist: mainly playing Hendrix songs again, but a new group named after the one he wasn't in" called the Band of Gypsies. He was drafted to replace the Gypsys' original drummer, Buddy Miles, who had to leave the reconstituted group to serve a prison term.

''When I first heard about the project, I thought, well, what's past is past,'' Mitchell says. But then a friend took him to see the band, which features guitarist and Hendrix imitator Randy Hansen (who played on the Apocalypse Now soundtrack) and bassist Tony Saunders. ''The crowd really seemed to like it, whatever I thought.'' Now as a Gypsy, Mitchell was philosophical: ''A good song is a good song. And the way we play it now may not sound the way it did twenty years ago.''

Mitchell himself was hardly stuck in the past. After Hendrix' death he went on to play with such luminaries as Jack Bruce and Muddy Waters. He got so busy gigging that in 1975 he said, '''Wait a minute!' I'd been on the road for fifteen years by that time. I had a four-year-old daughter I wasn't seeing, a house I hadn't lived in.'' He spent the mid-Seventies in Jamaica, recharging. Then it was back to Sussex, England, and studio work. Between sessions Mitchell has played on advertising jingles.

Work brought Mitchell to the town he called ''Hollyweird'', plans to move ''beyond just rock & roll,'' in a collaboration with jazz drummer Jack DeJohnette. Mitchell would not indulge in nostalgia. ''Woodstock?'' he snorts. ''It was a muddy field. A piece of shit. 'Love, peace, or I'll break your arm" it's got nothing to do with good music at all.'' Show less 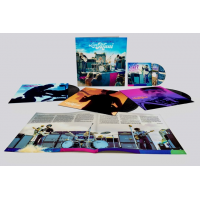 All About Jazz musician pages are maintained by musicians, publicists and trusted members like you. Interested? Tell us why you would like to improve the Mitch Mitchell musician page.