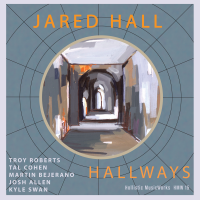 It has been a long road for trumpeter/composer Jared Hall. That road has been a path cloistered in jazz education, starting in his native Spokane, WA studying with Dan Keberle at Whitworth University, to his masters completion at Indiana University under David Baker.

At that point, Hall had a decision to make, in terms of continuing his studies, or jumping in headfirst to life as an artist at large. After all, this is a music of feeling, a social music which involves interaction with other musicians. "I knew I didn't want to continue with additional schooling unless I could study with a jazz trumpet figure I wanted to emulate, so I applied to the University of Miami and ended up with a teaching assistantship to Brian Lynch," says Hall.

Thus began his association with the master trumpeter, whose incredible flow of melodic ideas, and unparalleled rhythmic and harmonic variety have not only earned him a Grammy, but the notoriety of being a trumpet master without restriction of technique, in both the straight ahead and Latin jazz communities.

Hall's debut recording, Hallways, on Lynch's Hollistic Musicworks label, expresses clearly his compositional prowess, and his trumpet style that is both expressive and aggressive, with emotional swings more reminiscent of hard bop trumpeters like Lee Morgan and Donald Byrd than Lynch. His constant flow of melodic ideas, and beautiful tone throughout the range of the instrument has hints of fellow Seattle trumpeter Thomas Marriott. His lyrical approach is matched and richly enhanced by Australian saxophonist Troy Roberts, pianists Martin Bejerano and Tal Cohen, bassist Josh Allen, and drummer Kyle Swan, all associates of Hall during his tenure in Miami.

The opening number, "Wanderer," provides insight of what is to come from Hall as both a composer and trumpet player throughout these nine original compositions. The forward moving angularity of the melody, the powerful rhythm section highlighted by the intricacies of drummer Swan, and Hall's expressive, probing trumpet style, offers a masterful, wide ranging sound, and varied emotional landscape.

On "Meditations," Hall seeks to emulate a state of contemplation, concentration, and reflection in one's life. A ballad with a vocal-like statement, melodic bass lines, counter lines, and a horn interlude, the piece also carries a tinge of romance and melancholia. Here, Hall seems to be totally free of the encumbrances of methodology and technique, and demonstrates the beauty his playing can embrace, supported by the warm, liberated expressiveness of Roberts.

"Aphelion" features a unison melody between tenor saxophone and trumpet, creating a sense of warmth, and connection to the vastness of the universe, and the stake of humanity within. Indeed, the term aphelion refers to the point in the orbit of a planet which is furthest from the sun. Hall and Roberts provide an embracing approach, wandering to distant points apart from each other, then finding harmony and collective unity as their separate melodic passages intersect and bond together. In many ways, the exchanges between these two, what binds their personal musical worlds together, is what sets this record apart from most.

Currently Hall has been playing his original music with a variety of top tier musicians in and around Seattle. While he continues to teach privately, and as a clinician, the jazz audience in the Emerald City will look to see how this talented newcomer integrates himself on the scene. His performances at the storied Tula's Jazz Club, and The Royal Room in Columbia City are much anticipated, and should be even more so upon the release of Hallways. But there is more to being part of a scene than teaching and playing a few one nighters around town. The Seattle scene is a collective of support between musicians, and community. The talent level and spirit of innovation makes for fertile ground as Hall begins to integrate and explore the local scene. Hallways is a statement of liberation and change in life and music. It opens doors to a mystery, to a future to this point unknown for the intrepid trumpeter. Seems about right, for a musical form that is all about risk.