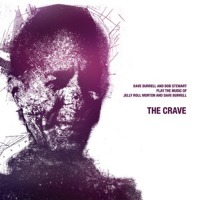 A leading free jazz pianist playing the music of Jelly Roll Morton? It's not as far-fetched as you might think. Morton has attracted a number of interpreters from the supposedly extreme end of the spectrum, from Sun Ra of course, first issued on Live At The Gibus (Atlantic, 1975), to Chicago trio Air on Air Lore (Arista Novus, 1979) and Japanese pianist Aki Takase's New Blues (Enja, 2012). The Crave makes explicit Dave Burrell's connection to older piano styles. Even his most outside excursions have been informed by elements of rags, stride and barrelhouse, bringing to mind the credo of the group he led with drummer Beaver Harris: From Ragtime To No Time.

On this limited edition LP Burrell tackles three Morton compositions alongside three originals, in the company of tubaist Bob Stewart. Recorded live in Cologne Germany in 1994, this was the first public performance of the music by the duo following the release of Jelly Roll Joys (Gazell, 1991) Burrell's solo recital of Morton tunes along with works by John Coltrane, Charlie Parker and from his own pen. The presence of four selections represented on the current disc is perhaps the main reason the session has languished in the vaults until now. It's certainly nothing to do with the quality of these joyous recitations.

The happy go lucky title cut, which Burrell terms Morton's masterpiece, begins in a surge of prancing staccato, before Stewart's nimble airy blown bass buttresses the marching tempo. Keeping to the ragtime form, Burrell then takes his turn holding down the thread while Stewart embarks on a melodic outing. Burrell's originals sit easily along the heritage tracks. "Popolo Paniolo" in particular with its two part theme and syncopated diction creates a neat bridge, avoiding any sense of jarring discontinuity. It's also a fine illustration of how the pair place technique at the service of the music as Stewart's growled multiphonic chords provide the underpinning for Burrell.

A further two previously unrecorded songs from Burrell's jazz opera "Windward Passages" complete the first side. Dramatic rippling piano and a mournful tuba lead melody line introduce the dirge-like "I Am His Brother," the only place where Burrell cuts loose, while "Pua Mae 'Ole" has a valedictory end of evening aura. Side B comprises two further Morton tunes: the slow woozy drag of "New Orleans Blues," and an exuberant reading of "Spanish Swat," the upbeat counterpoint between piano and tuba belying the initial somewhat world weary feel. Wonderful.