By KARL ACKERMANN
August 27, 2017
Sign in to view read count 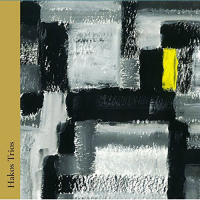 The self-titled debut from the Spain-based Hakos Trios is a cross-continental outing from diverse European and Asian influences. Working with straight-forward pentatonic scales as well as Baltic and Eastern inspirations, the resulting pieces take shape as unfamiliar but accessible. Billed as a double-trio, the Bulgarian, Serbian and Spanish musicians maintain a fixed rhythm section and trade out tenor saxophone for trumpet.

Though the players in Hakos Trios are likely unfamiliar, their jazz association are numerous and impressive. Bulgarian bassist Vasil Hadjigrudev was earlier associated with a number of regional hardcore-punk bands before being inspired by the recordings of Charles Mingus. He studied with Milcho Leviev who had played and/or recorded with Billy Cobham, Art Pepper, Roy Haynes and Dave Holland. Drummer Kovac Lav, a native of Serbia, studied at the Prince Claus Conservatoire in The Netherlands and played in diverse eastern European settings such as the Vojvodina Symphony Orchestra, Keckec & Acid Folk Orchestra, and he was a contributing musical performer in the National Theater of Serbia. Trumpeter Julián Sánchez, of Granada, has performed with Perico Sambeat, Bruce Barth, Bob Mintzer and many others. Tenor saxophonist Enrique Oliver of Málaga has played with Benny Golson, Jorge Rossy, David Kikoski, Peter Bernstein and a host of familiar jazz luminaries.

"Hakos Tune" and "Hakos Tune Take 2" are respectively led by tenor sax and trumpet and the primary differences are in pitch and dynamics. "Take 2" is decidedly freer in comparison to the opener with Hadjigrudev and Kovač assuming roles that are more supportive. In the case of "Raga 1" and its second-take counterpart, the instrumentation largely accounts for variation in the two versions. Oliver's tenor on the first take, and Sánchez's trumpet on the second, engage in a head-on scrap with Kovač while Hadjigrudev's deep, woody bass keeps the disparate improvisations tethered together. The closing piece is "Improvisation 2" featuring some revealing extended technique from Sánchez, reminiscent of Natsuki Tamura.

Recorded in Spain in 2016, these original compositions and improvisations are compact; of the nine pieces, only one clocks in at more than five minutes but Hakos Trios are no-frills in their narrative. The wide-ranging scope of the music can be dense and challenging but the group(s) have stories to tell and they unfold with patient listening. Hakos Trios is a fine debut from artists whose chemistry belies the fact that they have never played together prior to this recording session.