By JEFF DAYTON-JOHNSON
October 10, 2010
Sign in to view read count
Herewith two records released at about the same time, on the same label (Hungary's Budapest Music Center), both prominently featuring Hungarian guitarist Gábor Gadó. If, however, it's pleasing to play the discs side by side—and it really is—it's as much because of the two records' differences as their similarities.

Budapest Concerts is a concert recording by a small group; Lung-gom-pa, meanwhile, is a studio date by a large and varied ensemble. But the most significant distinction is that the former is a free-jazz performance, while the latter is elaborately composed. And the most interesting thing, perhaps, is that the free-jazz record makes for far "easier" listening, flying in the face of expectations. 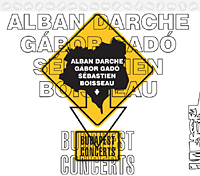 The Franco-Hungarian trio performs a series of free-jazz pieces, each based on the slightest of sketches. In general, the drumless format produces a music of gentle exhalation, atmospheric and at times filmic (as on the stop-go waltz tribute to Tim Burton).

Saxophonist Darche is responsible for much of the recording's gentle beauty. Though his avant-garde credentials are nowhere in doubt, he nevertheless approaches a melodic idea as though he were Paul Quinichette, or, better still, Zoot Sims: open, approachable and with a vague sense of swing.

Guitarist Gadó, if anything, is even more open, approachable and swinging. On both records under review he frequently deploys pretty sound washes very much in the style of Bill Frisell. Like the French guitarist Manu Codjia, however, Gadó seems to conceive of these moments as the quiet end of a musical spectrum centered on considerably rowdier sounds than Frisell's.

The generally sinuous sound of the record is interrupted, effectively, by the agitated climax that occurs in the middle of "Tregor Song," with Gadó's guitar recalling Sonny Sharrock's work with Last Exit and Boisseau providing a choppy percussion with his bass. This percussive element is magnified in "La Conjuration des imbéciles / A Confederacy Of Dunces," with what might be Darche's saxophone slaps and squeaks, as well as borderline-funky guitar-bass interaction. Sinuousity returns for the two final cuts. 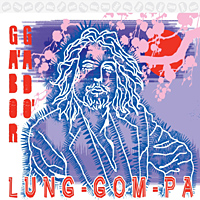 Burton is not the only savvy cultural reference among the song titles on Budapest Concerts—there's also John Kennedy Toole's 1980 cult-classic novel A Confederacy of Dunces, for example. Guitarist Gadó's disc, meanwhile, name-checks a whole other class of cultural phenomena: the fourteenth-century Russian icon painter Andrei Rublev, the Kabbalistic notion of the immanence of God, the Tibetan lamas who can run at top speed across rugged terrain for days without end (these last are the lung-gom-pa of the title), to name just a few. The obscurity of these references should be taken as a sign that Lung-gom-pa will be a rather more recondite affair than the trio date.

And so it is. Nothing here is borderline-funky. But the record is equally rich in rewards. The compositions are complex, angular and certain to hold deep emotional appeal only for folks who wear "I ♥ Serialism" t-shirts. That's not to say that they will not appeal to the rest of us.

Surely, by creating thoughtful but unfamiliar musical structures, Gadó and his collaborators mean to heighten our attention, encouraging us to focus on the musical elements in a way we do not when we settle in comfortably to listen to singer Ella Fitzgerald, say, launch into "Thou Swell." Thus the pensive reeds of "Narrations" harken back to Jimmy Giuffre's cool experiments (e.g. "Abstract No. 1," on drummer Shelly Manne's "The Three" and "The Two", Contemporary, 1954), giving way to bright, Messiaen-like piano chords.

The unfamiliar components are carefully arranged; most numbers feature a meticulous sequence of interventions that aids concentration. And when a deliberately cluttered passage comes along—such as the rollicking final moments of "Bunan XVII"—the contrast is pleasing.

Saxophonist Kristóf Bacsó stands out in this strong cast for his focused imagination. His solo on the title track, for example, seems to bring the performance back to the task at hand following the leader's bravura, far-out guitar solo.

The three-part "Infra Voices From the Ultra Trumba" that closes Lung-gom-pa stands apart from the rest—and in the pursuit of the unfamiliar, ups the ante. The suite is far more consciously close to contemporary classical music than the remainder of the disc, with its nagging, modern bass and cello playing. Also different from the other pieces on this disc is the suite's looser-sounding arrangement of instrumental voices, and the jagged displacement of rhythmic accents.

These two releases, while fairly studious, never fail to swing; Gadó comes across as big-hearted and having a grand time. And if these records are any indication, jazz enjoys superb health in Hungary today.