Hristo Vitchev: Charting His Own Way 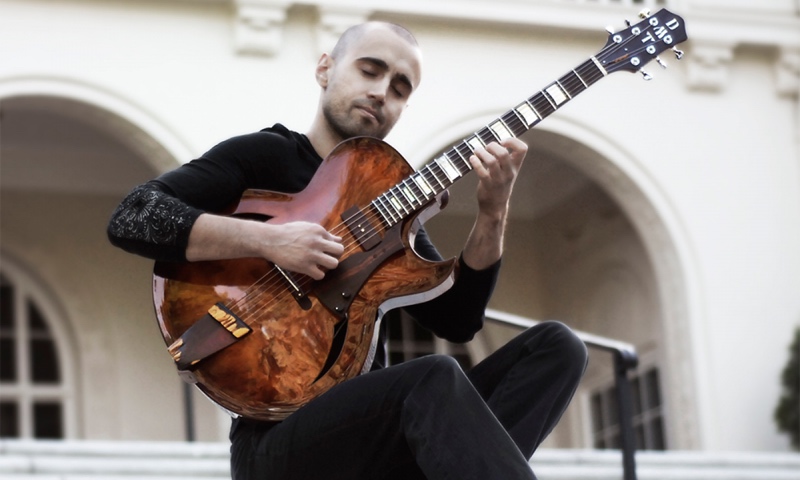 By DAVID BECKER
November 22, 2016
Sign in to view read count
Hristo Vitchev isn't a typical guitar hero. Supremely fluent with his instrument, the prolific composer and performer would rather communicate than show off complex technique. His albums and concerts are full of gorgeously understated performances that leave just the right amount of room for the musicians to support each other and the audience to fill in the blanks.

Maybe it was inevitable that Vitchev would take an idiosyncratic approach to jazz, given the twisted route he took to get to the music. Born in Sofia, Bulgaria, his family relocated to Venezuela for a decade before making it to the U.S. The moves were accompanied by serious shifts in taste —heavy-rock. particularly Metallica, was Vitchev's fascination before discovering jazz late in adolescence.

Vitchev, now based in Northern California, dug deep when he caught the jazz bug, however. He's released seven CDs of lilting original compositions over the past decade, mostly working with his well-oiled quartet. He tours regularly, including annual forays to Asia, and has created instructional books and videos to explain his distinctive approach to the guitar.

All About Jazz: "Impressionistic" seems to be the description most often used for your work. Are you satisfied with that?

Hristo Vitchev: I'm not someone who really likes putting labels to things—as they say, beauty is in the eye of the beholder. But you have to be practical, and categorizing music in a larger area is helpful for people to find something they might like.

I definitely think my music at the technical or theoretical level does come closer to the impressionistic school. As far as the mechanics of the movement and the harmonic structures and so forth in impressionistic music, they're a little bit outside of the established conventions of Western classical music. There's something called the non-functional harmony, which are harmonics which don't function by the rules of attraction of harmony but they function by the sound. As long as the sound is pleasant and conveys an emotion, in impressionistic art that makes is useful.

So when I write music, it's more along those lines. My harmonies and movements are definitely away from the main established rules...I think impressionistic music creates these opportunities... There's more unknowns, and the listener can maybe bring meaning to the piece in a much more personal way.

AAJ: What's really impressed me, especially with your last CD (In Search of Wonders, 2016, First Orbit Sounds Music), is how lightly the songs wear their structure. I know there's a lot of thought behind each piece, but there seems to be so much space for the instruments to react to each other.

HV: My main goal when I work with an ensemble is I want this to be a conversation between all the members and for everyone to be able to bring their unique voice to the table. So the theme of each composition is really just a conversation topic, in which I bring a question to the group and we hope we can find an answer together.

So I do try to plan this music with a lot of space for each character in the play to say as much as they can possibly say. A lot of the time, dates end up working better if you play with exactly the same people because the music at a technical level looks much simpler. I already know each musician's way of speaking, so I can just put down some harmony suggestions and I'll have a pretty good sense of what we'll do with it.

Definitely over the years that's become more and more of my main goal, to focus on that in-the-moment experience, where we're having a musical conversation...That's pretty much the soul of jazz music.

AAJ: Do you still do your composing on piano?

HV: To this day, I think I've only written one composition on the guitar. I started (composing on the piano) on purpose because after practicing guitar all these years, you cannot help but develop muscle memory. Certain things are so ingrained in my muscle memory on the guitar that my fingers think way, way faster than my brain. If I compose on the guitar, decisions get made without me realizing it—it's just inevitable with the autonomous nature of muscle memory. It sounds OK, but afterwards when I listen to it it's somehow missing that soul. It's not really what I wanted to say.

To escape that, I play piano, which I've done for a while but I don't have anything near the muscle memory I do on guitar. So when I compose that way, I really have to think about every note I play. It's a slower process, but I get much closer to the voice inside, what I'm trying to say.

AAJ: You came kind of late to jazz. How do you think that has affected your approach?

HV: My early influence was definitely with rock music, particularly heavy metal. I wasn't really influenced by jazz playing until later, by the preparation of the guitar and the stringing,

When I got in to jazz, I learned the basics and studied the Wes Montgomerys and Freddie Greens, and I learned how the language evolved. I did that, but how it came out there was still a quite a big difference from what a traditional jazzman does. Then once I learned the theory and the grammar of how jazz harmony and melody work together, my only approach point at that level was what I had known from rock guitar, blues guitar, metal, so that was my first point of entry to that world.

I think that really influenced my melodic voice as a composer. It's a little bit different from a jazz person who from an early age would get into this music and follow all the established players.

AAJ: So you had to develop your own vocabulary?

HV: It's more a matter of adopting some of the vocabulary from rock and metal music, which is quit different in terms of harmonic theory. I came up with some different ways of saying things. Which eventually gave me ideas about how to interpret melodies and how to take things differently.

HV: Yes, playing with Wally has definitely re-awoken some of those influences through all those years of jazz training. Idiot Fish veers a little more to the electric rock idiom. It's still presented through the medium of jazz interpretation and harmony, but the rhythmic ideas are different —we're not dedicated to the traditional jazz sensitivities of swing and four 32-bar measure phrases...It's very rewarding to apply these harmonic patterns of jazz I learned and combine them with the rock ideas that go much further back for me.

AAJ: A lot of your albums are about a particular place (different parts of Bulgaria both in 2009's Song for Messambria and 2011's The Perperikon Suite.) Is the music another way of accessing a memory for you?

HV: Usually all my influences come through things that are not musical. Yes, I get inspired by listening to great albums. But as a composing voice, what really inspires me is making visual art and scenery. The whole sensation of visiting places and experiencing something special you've never experienced before from a visual standpoint. It somehow gets in your body and becomes a feeling and sensation.

So that's what really inspires me —a piece of art or a beautiful piece of scenery or landscape. Over the years of traveling around and seeing beautiful new places, that's ended up being the main force.

AAJ: You wrote a book on chordal theory (Between the Voicings: A New Approach to Chord Building for Guitarists). Can you explain your theory in layman's terms?

HV: It's a system that I basically developed in my jazz studies, mainly because I studied piano players for the most part. After a lesson, I'd go home and adapt what I had learned to the best of my ability to how the guitar works.

It was revealing—the way that guitar players think and the way piano players think could not be more different. and the way you teach them is quite different. The guitar is a very confusing instrument because of its tuning. And the same notes on the guitar are available on every string; with the piano it only occurs once. It's not a very well-built instrument, either, the guitar.

Over the years, people who teach guitar have made it very patternistic and visual. You have chord shapes and little pictures of the neck with dots where you put your fingers, and that's how most guitar players learn their chords. Which eventually, over years of playing, becomes very limiting at the creative level, because even though those notes exist in multiple places, you're only learning one. It's a very limiting and to my ears very square-sounding box. So the main idea in the book is to explain to guitar players how piano players think about harmony, and learning the guitar in a way that harmonies are available everywhere. Once you understand the guitar, you're free to select any chord at any location

AAJ: How did you develop such an audience in Asia?

HV: My fascination with Asia started many years ago. I was fortunate to be invited to tour Japan as a sideman in a group; it was really a life-changing event, because for the first time ever I saw an appreciation and respect for jazz I'd never seen anywhere else. It's almost at an emotional, religious level. That intrigued me—what is it about this culture that gives such attention to jazz?

So as I developed my own groups, that was always an idea for me, how can I share my music with this kind of audience? So I made contacts there little by little and finally in 2012 I was able to take my group to Japan for the first time. We made a lot of friends, and we've tried to keep those relationships alive and expand the audience. Now we have our own niche on the Japanese market and that's made it possible to come back every year. And once we started getting to know Japan, people told us the same thing was happening in China. People were very generous in helping us get established there, and it's just been a series of discoveries.