By JOHN EYLES
November 23, 2016
Sign in to view read count
Back in 2007, Marc Baron on alto, Bertrand Denzler on tenor and Jean-Luc Guionnet also on alto were three-quarters of the unnamed saxophone quartet that recorded the ground-breaking album Propagations (Potlatch, 2007), alongside Stéphane Rives on soprano. Together, the four reinvented the rule book for a saxophone quartet in the new millennium, ignoring the conventional vocabulary and introducing greater use of sustained notes and pad noise...

Disappointingly, despite the album's musical and critical success, the four have not recorded together again since, but have gone their separate ways. They have become stalwarts of the Potlatch label, with about half of the label's releases since Propagations featuring one or more of the four. In that time, their paths have diverged so much that it seems unlikely they will reconvene as a quartet, a point that was eloquently illustrated by these recordings including Baron, Denzler and Guionnet, coincidentally released within months of each other... 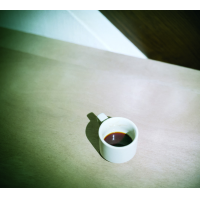 Following in the footsteps of Hidden Tapes (Potlatch, 2014), Baron's intriguing first outing as a composer rather than a saxophonist, Un salon au fond d'un lac is rather more varied and focussed. Where Hidden Tapes was centred around the content of old cassette tapes—dating from 1965 through to 2013—augmented by the addition of music and sounds from other sources, this time out the balance has shifted in favour of the latter.

This album consists of three tracks, totalling thirty-five minutes, two of about sixteen minutes each, with a far shorter one sandwiched in between them. The style of the longer tracks, "Un Salon" and "Un Lac," is recognisably Baron—multi-layered pieces that create their own distinctive mood, revealing more detail with every hearing. Although human beings are skilled at imposing meaning on random phenomena (seeing the face of the Virgin Mary in a passing cloud, or Elvis's profile in a burnt pancake...) these tracks have no obvious narrative thread and so rely on each listener's personal interpretation.

The tracks frequently juxtapose contrasting passages to emphasise their differences—for example, glitchy electronic sounds and a child's laughter (As before, the latter sound can make one feel uneasily like an eavesdropper, but less so than on Hidden Tapes, thankfully.) Occasionally, a promising passage seems to end prematurely while another outstays its welcome, but such judgments will vary from individual to individual.

Strangely, the most engaging track here is also the shortest, "La Structure," which clocks in at three-and-a-half minutes. It consists of a lone voice—Baron, no doubt—reciting decimal numbers (one point one, one point two...) which gradually morph into a cacophonous cut-up collage form that makes their content both unintelligible and compelling. That track gives a glimpse of an avenue that Baron should consider pursuing further in future. Certain passages of the two longer tracks would have been promising raw material for similar treatment. Overall, as was true of Hidden Tapes, Baron's work remains personal, idiosyncratic and endlessly fascinating. 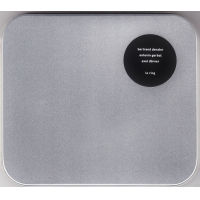 Although Bertrand Denzler has featured frequently on Potlatch, notably in Trio Sowari, with Phil Durrant and Burkhard Beins, and on his remarkable solo album Tenor (Potlatch, 2010), he frequently appears on other labels in a variety of guises, including the fine ensembles Hubbub on Matchless, Zoor on Umlaut, Horns and ONCEIM, both on Confront.

The music here consists of a single forty-one-minute track, recorded live during Festival Noise #5, in December 2015, in Toulouse. As so often happens, their mutual familiarity allows the three to get straight into playing together easily and naturally. Opening with a sequence of sustained notes on trumpet and saxophone, Dörner and Bertrand react to one another without any rush, each giving the other space and, in typical fashion, savouring every note to its end. They each produce an impressive variety of sounds, from under blown and breathy through to full blow and high pitched.

Whether he is supporting the horns or—as on his impressive solo album Sound of Drums (Umlaut, 2016)—in the spotlight himself, credit must go to Gerbal, whose percussion acts as the glue that holds everything together, making the music flow. Together, the three combine to give an enthralling performance full of peaks, troughs and climaxes, displaying the knack of building tension and releasing it at just the right moment. 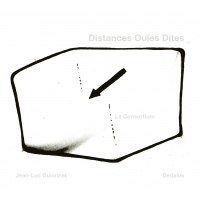 As well as being Denzler's saxophone partner in Hubbub since 1999, over two decades Jean-Luc Guionnet has built up an impressive discography involving numerous collaborations on a range of labels. In addition to playing alto saxophone, recorder, electronics and organ, he has also frequently been credited with photography or graphic design. His last Potlatch release was the boldly experimental four-disc set Home, with his frequent collaborator Eric La Casa, which was based on field-recorded interviews with four Glaswegians in their homes.

With Distances Ouïes Dites, Guionnet has pushed his frontiers further, producing a work that is just as experimental and enthralling. It records a March 2013 concert in which the seven-piece Dedalus Ensemble gave a performance of the scored Guionnet title composition at Le Consortium art centre in Dijon. But, being Guionnet, things were not as simple or straightforward as that makes them sound! In Le Consortium, the audience was in one room with viola player Cyprien Busolini while the other six musicians were located elsewhere, each in a separate room. (To those who have seen it, that set-up may sound similar to Icelander Ragnar Kjartansson's nine-screen video work The Visitors which has been touring world art galleries, in which nine musicians perform a sixty-four-minute piece together, located in different rooms of a run-down mansion in upstate New York. The big difference is that Kjartansson's musicians could hear each other via headphones while Guionnet's could not...)

So, the score and the musicians had to take account of such complex factors as the sonic characteristics of the different rooms, the distances between instruments and the audience and the time for sounds to travel between them. If all that conjures up visions of a nightmare for the musicians and audience to cope with, the recording bears no evidence of anyone struggling with the situation, and the music sounds as coherent and fluent as if the ensemble and audience were all together in one room. The septet's instrumentation of strings, electric guitar, voice and brass provides great scope for variety and contrasts which Guionnet exploited to the full. Across fifteen tracks, varying in length from thirty-seven seconds to seven minutes, the composition's twenty-one sections cover a broad spectrum of styles that are integrated together into a kaleidoscopic whole that flows easily without any disconcerting jump cuts or non-sequiturs.

Throughout, there is a feeling that the musicians are not just playing in the space but also playing with it, in both senses of that phrase; firstly, they are toying with it in order to discover its acoustic properties and, secondly, the space acts as an eighth ensemble member, shaping the music in its own ways whether that music is a drone, melodic interlude, percussive passage, quiet reflective section or a tutti.

The album's fifty-two minutes guarantee a fulfilling and pleasurable experience, time after time, one that demands to be repeated frequently.