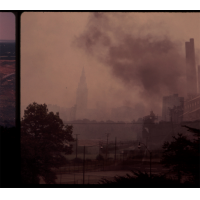 Since the turn of the millennium, Marc Baron has taken us on an interesting aural journey (albeit one that could have been more fully documented on disc.) He has evolved from an improvising alto saxophonist—maybe best represented by the sax quartet on Propagations (Potlatch, 2008)—through transitional experiments such as the "interesting" Formnction (Potlatch, 2009) by the duo Narthex, on which the sounds of bass and saxophone were replaced by constant frequency electronic tones, and a 2012 album on Cathnor which intriguingly consisted of seven tracks each lasting precisely seven minutes.

Now, Hidden Tapes confirms Baron's transformation from instrumentalist into composer. The album's tracks were constructed around old cassette tapes which (judging by the track titles) date from 1965 through to 2013, the year when Baron created these pieces. In addition to the original content of the tapes, Baron added sounds from other sources, including movie soundtracks and classical or liturgical music extracts. Using analog devices, he sped up or slowed down his sound sources, layered and transformed them. In typical fashion, Baron is not averse to integrating periods of silence into them, sometimes as respite, sometimes by way of contrast. Refreshingly, he only used a computer for editing and mixing, not as a source of sounds. So, the frequent crackles, hisses and pops which punctuate the pieces must originate from tapes and discs not computers.

The end results are five complex, multilayered pieces that integrate the content from those original tapes but go far beyond them. Each of the pieces is a unique soundscape that creates its own distinctive mood and reveals more detail every time it is heard, taking the listener on a series of voyages of discovery. Sometimes, the pieces seem to have a narrative thread, sometimes not. Partly, that depends on Baron's use of voices but, given that the voices we hear seem likely to be those of Baron's friends or family—maybe even including his children, judging by the title "2013—A happy summer with children"—it is understandable that they are often distorted beyond recognition; had that not been the case, listening to them could have felt intrusive or voyeuristic.

In the end, Hidden Tapes passes the test of any work of art that is worthy of the name: the more time is invested in it, the greater the rewards it gives back. There is no point emphasising that the music here is personal, idiosyncratic and fascinating—increasingly, those words define Marc Baron's work.

Marc Baron: old cassette tapes and sounds from other sources.