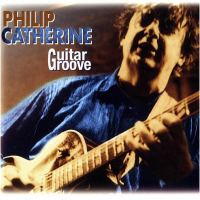 If you like melodic guitar-based jazz, Guitar Groove is not to be missed.

This CD is divided into two parts, one a section of seven relatively up-tempo numbers collected under the heading "Groove," the other a concise six-song segment entitled "Quiet Moments." It's a masterful effort that finds Catherine on both electric and acoustic guitars, the former on the faster cuts, the latter on some of the ballads.

A picker of Belgian and English descent, Catherine claims Django Reinhardt and Belgian guitarist Rene Thomas as his chief influences. But Catherine is no anachronism. The 56-year-old guitarist has played with Stephane Grappelli, Chet Baker, Charles Mingus and Jean-Luc Ponty, so he's equally adept with European gypsy jazz, straight-ahead jazz, and fusion.

Whether firing off a barrage of clean lines around a funky beat or rendering a ballad, Catherine is blessed with a radiant tone and a keen sense of melody. He spews forth chords and notes with a staccato linearity on the fast tracks, then he concentrates less on improvisation and more on melody with his ballads. Since 12 of the 13 tracks are originals, Guitar Groove is also a showcase for the Belgian's tuneful compositions.

Most of these cuts have a mellifluous European quality about them, and excellent support is provided by American musicians Jim Beard (keys), Alfonso Johnson (bass) and Rodney Holmes (drums), a trio that formerly backed Wayne Shorter. Beard is a versatile keyboardist and fine accompanist. At times here the chemistry between pianist and guitarist brings to mind other great guitar-piano duos such as Jim Hall and Bill Evans, Pat Metheny and Lyle Mays.

The tunes in the Groove section are mildly funky and extremely nuanced, while the mellow section is just plain gorgeous. The CD includes a cool funk cut ("Merci Afrique"), the funky-bluesy title track, an upbeat shuffle ("Sunset Shuffle"), one standard ("Stardust"), three beautiful original ballads ("Here and Now," "Nuances" and "Simply"), and tributes to George Shearing ("Hello George") and Weather Report ("For Wayne and Joe”) . "Hello George" features some wonderful interplay between Catherine and Beard. Also great are "Chinese Lamp" and "Blue Bells," a couple of laid-back pieces on which Beard goes electric.

Guitar Groove is an astoundingly lyrical effort from a guitarist in his prime. It should appeal equally to fans of mainstream jazz and fusion, and to anyone who appreciates superior jazz musicianship.