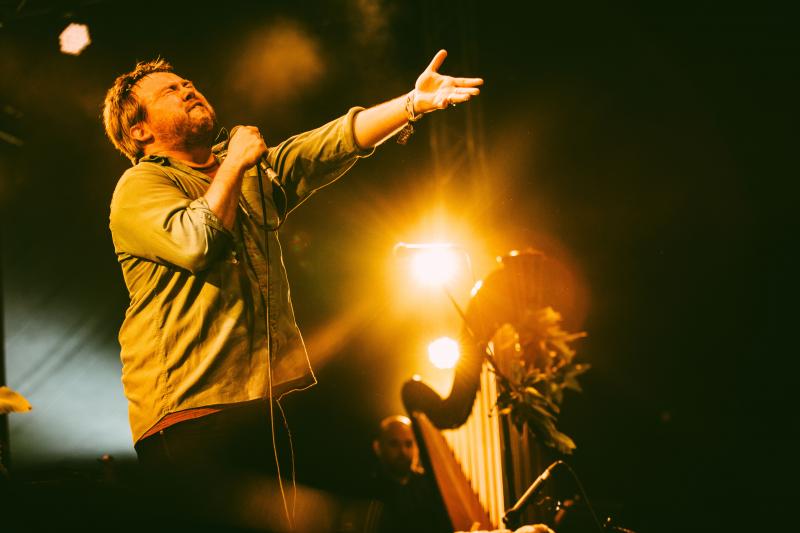 Like the now deceased Big Chill festival, the Green Man weekender languishes in an ideal location, set within the rolling Brecon Beacons in south Wales, verdant and misty, its main Mountain Stage stretching across a natural amphitheatre, its other stages close enough for easy walking, but not too near to suffer overwhelming sonic bleed. Just about the only drawback is a tendency for these hills to suffer from unstable, heavy rainfall. Sometimes the 15-year-old Green Man is lucky to avoid such a downpour, but not this year, although there was still a good deal of sun in evidence, for much of the time. The worst sluice-patch arrived on the last of its four days, not so much heavy, but just doggedly persistent, for several hours, forcing most non-crazy folks to watch outdoor acts from within the perimeter-edging drinks tents. It was a dreary Sunday afternoon indeed, stuck inside the cider tent at The Walled Garden stage, espying a run of performers, vaguely visible in the far distance. The other fortunate factor is that, unlike Charlton Park, for the previous month's WOMAD festival, Glanusk Park isn't particularly prone to mud accumulation, given the torrents that periodically spread over this long weekend.

Whereas last year's festival featured an extensive day of Krautrock-inspired (or actual Krautrock) artists in the Far Out tent, this year saw no such themed action, aside from a general preponderance of high quality artists with more adventurous inclinations. Some of the best sets happened here in Far Out, their power sometimes heightened by swollen crowds, sheltering from the rain. Angel Olsen and Thee Oh Sees could arguably have coped with main stage exposure. The outsider's outsider Richard Dawson probably played to his largest crowd so far, and the Japanese psychedelic combo Kikagaku Moyo doubtless converted a fresh horde of followers, when they offered one of the weekend's first great sets. Most of the more-than-usual-number of jazz outfits appeared in the cosier Chai Wallahs tent, but drummer Moses Boyd and his Exodus gave a strong Saturday afternoon performance, essentially being an expansion of the much higher profile Binker Golding duo.

Tokyo's Kikagaku Moyo (translated as Geometric Patterns) descend themselves from the heaviest Black Sabbath sludge-riffing, but also possess an amusing penchant for folk elements, much like their countrymen Acid Mothers Temple. Long, straight (or slightly wavy) tresses abound, and the fuzz is enlarged into repeated solo climaxing (including electric sitar!), facilitating the only afternoon headbanging outbreak of the weekend. They are genuinely transported from 1972, intact in their hallucinatory state. Few artists managed to top their power in the days to come, so this was an early Friday pinnacle.

Later that day, singer-guitarist Angel Olsen appeared with an expanded band, garbed in matching suits, and coming across like some updated incarnation of Bob Dylan's Rolling Thunder Revue, alternating between opalescent ballads and invigorating rockers. Olsen is turning herself into a starrier figure nowadays, also benefitting from being flanked by striking co-vocalist, keyboardist and tambourine-shaker Heather McEntire. Then, the next night boasted a similarly potent set from Thee Oh Sees, with double drums, pumping bass, and an intensely riffing John Dwyer on guitar. The foursome's relationship is devoted to the ultimate rockaboogie trundle, a speeding garage band rollercoaster, with the sticksmen deliberately playing quite similar parts, heightening the general, unstoppable momentum. Dwyer screams and whoops, and his obsessional acolytes fill the marquee with an electrified charge. Sunday's winning Far Out show came from singer-guitarist Richard Dawson, himself (for now) shunning solo performance for an expanded band set-up, including Welsh improvising harpist Rhodri Davies, and his teddy bear mascot, sat at stage-front, microphoned up in case he has any ursine observations to make. The newer material lacks the confrontational, warped power of Dawson's solo ditties, but it's great that he's probing unfamiliar zones, even if we, the audience, might be lagging behind in our appreciation. Maybe we just need more time for the newer songs to sink in, as when Dawson reveals "The Vile Stuff" in its full-combo form, it still retains its monumental, visceral immediacy and unusualness, re-bedded in a broader anti-symphonic form.

The Walled Garden was the place where another sort of theme developed this year, even if it was an amorphous dedication to UK folksiness, an area that was more important to Green Man in its early years. This included sets by Trembling Bells, Alasdair Roberts, Yorkston Thorne Khan and Michael Chapman, but there was still room for traditional warpings from other lands (not least Aldous Harding, from New Zealand), as well as clusters of alternative jazz (Melt Yourself Down) and alternative rock (The Orielles, Girl Ray). This is another crucial stage for the festival, especially in a year where the chief Mountain Stage mostly gravitated towards more mainstream singer-songwriter artists. The weather smiled on Harding, delivering deeply with her mannered voice and gestures, clad in white, and accompanied by the keyboardist known as Invisible Familiars, and a guesting H. Hawkline on bass. Trembling Bells rocked out with their accustomed prog-folk admixture, dealing well with a few technical problems (singing a capella), and Melt Yourself Down ran over time with a somewhat rambling, repetitive and crowd-pleasing set. The Orielles triumphed at noon on Saturday, the inevitable highlight of their set being "I Only Bought It For The Bottle," already a classic single. This Halifax trio's guitarist Henry Carlyle Wade plays with the most reverb-plunged disembodiment possible, whilst bassist Esmé Dee Hand-Halford delivers the adhering vocal hooks. So youthful, but already getting it together with natural confidence.

Speaking of newer talent, it's always essential to spend at least some of the time at the Rising Stage, although it could be said that Maddonatron have already risen, possibly since the time they were booked to appear. This year's 'discoveries' include London trio Sap, who model themselves on Ziggy Stardust, and at the other end of the spectrum, acoustic guitarist Jim Ghedi, sending his scintillating lines on a wandering hover.

The best points to hit the Chai Wallahs tent seemed to be either first thing each day (around noon), or last thing in the evening (starting at midnight). The Comet Is Coming capitalised on the frenzied late night mood, delving even deeper into the cosmic electronic reaches, whilst Mammal Hands played a spirited set, but giving the impression that after so much gigging they've become a touch too slick, negotiating complicated figures and shifts, sounding like they know exactly how it's all assembled, now feeling less call towards the unexpectedness of improvisation. At the beginning of a couple of afternoons, it was pleasing to bask in front of the relaxed sounds of Vojta, a one-man-band with a large didgeridoo and a box of effects, and the duo of percussionist Manu Delago and singer Pete Josef, who captivated a quietened gathering well before most of them had chance to imbibe too much real ale or Welsh cider.

The veteran English folk singer Shirley Collins played an early evening Mountain Stage set, but it really was advisable to draw close to the front, as her subtleties were dispersed into the hills, if a high perimeter seat was taken. Your scribe realised this too late, and kicked himself sharply. P J Harvey clearly wants to become a veteran English folk singer herself, as her newest repertoire crafts a modernised political platform, within a gothic manifestation of traditionalism which Aldous Harding (for instance) knows better. Headlining on the Sunday night, and despite the classic ensemble line-up, including James Johnston, Terry Edwards and Mick Harvey, the band is deliberately anti-rock, favouring a busking street outfit nature, which together with the often feeble call-and-response vocals, sounds like a poor man's traditionalism (well, that could arguably be the best sort). It's clear what Harvey is aiming for, but the material just isn't that impressive as a modern times folk-book. When the same crew (guitars intensified) head back to her prime songbook from the 1990s, this is when the set ignites, even allowing Harvey to move around more, and to have an increased vocal expressiveness. Much of the set is just too damned static (and darkened) for a headline 'show.' Just this once, the oldies really were the besties, as witnessed during Harvey's readings of "50ft Queenie" and "Down By The Water."