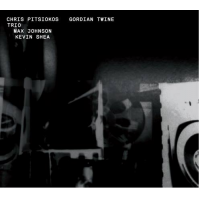 Saxophonist Chris Pitsiokos answers a slight variation of the classic Zen koan, what is the sound of one hand ripping a telephone book in two? It is this: alphabetical orderliness counts, but then again so does maelstrom. Gordian Twine, his debut as a leader, showcases his organizational and compositional skills, and, maybe more importantly, it places him within the vortex of a cyclone of sound.

This new kid on the block saxophonist has been working solo, in duos with rock and spoken word artist Lydia Lunch, drummer Weasel Walter, and noise artist Philip White. This disc with his trio of bassist Max Johnson (Kirk Knuffke, Federico Ughi) and Kevin Shea (Mostly Other People Do the Killing, Talibam!) is a brief (at just 31 minutes) outing, one that grabs handfuls of attention.

"Prologue" opens with the unruly clang of drums and hyper-speed bass lines before joining with a singed saxophone that draws equal measure from Peter Brotzmann, John Zorn and Ornette Coleman. His sound has the Brotzmann lung capacity, the Zorn fluttered notes and the blues tinge of Coleman. What is significant here is that the music maintains a taut framework throughout. "Lethe" is ablaze before it stops dead in its tracks, reignites and stops. This is not free jazz, it is drilled and organized music played at the highest level. "Atropos" feels like speed-metal for an acoustic trio. The music rejects the death of jazz by raging against all darkness. Pitsiokos can also write an evocative melody like "Lachesis." Here he plies a bluesy touch over the traced lines of Johnson's bass.

The tautness of the compositions and the discipline of the band are the draw here. The three play like punk rockers who have graduate degrees in physics.