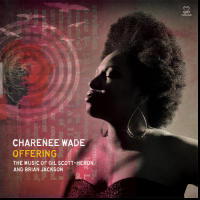 As it often happens with many artists so in tune with the times that they are actually ahead of their time, the immense contribution of musical/cultural revolutionary Gil Scott-Heron continues to be revealed and acknowledged. Albeit, there has been a perpetual cult surrounding this enigmatic figure which defied any sort of categorization both in music and personality, but judging by the posthumous releases of his catalog and continuing tributes, his legacy has taken on the iconic qualities it deserves. His musical partner throughout his most productive phase, pianist Brian Jackson, provided the catalyst for much of Gil Scott-Heron's best work, and is recognized as an innovator in jazz and modern urban music.

Charenee Wade is a singer, composer, arranger and educator, noted for her self-produced "Love Walked In," in 2011. Previous to this release, she honed her vocalizing skills as featured guest on releases by Tia Fuller, Eric Reed, and the Eyal Vilner Big Band, among others. Armed with unfathomable passion and assurance, Wade introduces Offering—The Music of Gil Scott-Heron and Brian Jackson. Utilizing the lyrics and music of the gifted duo as a launching pad, she takes her innovative arrangements into another dimension, conveying the intended message with her singular and assertive vocal textures, evolving, while honoring the spirit of the original source.

Gleaning from the songwriters' peak prolific period of the 1970's, Wade chose an interesting set list with the title track setting the conceptual tone of the record. "Song Of The Wind," shows the dynamic emotional range that Wade can cover, accompanied by vibraphonist Stefon Harris, the song becomes the transporter of the skies. The pace is slightly quickened with "A Toast to the People," with its timeless salutation to those who were lost in the struggle. There is the straight ahead version of "Home Is Where The Hatred Is," this being one of Scott-Heron's masterpieces, Wade cleverly takes it into a tailspin, building into almost frenetic phrasing with her horn like voice that portrays the song with all its dark poignancy and despair. "Ain't No Such Thing As Superman," is set up superbly by bassist Lonnie Plaxico, who authenticates the tempo with that inner city feel, allowing Wade to stretch and scat her way through the other side. "Western Sunrise," featuring Plaxico and guitarist Dave Stryker, is an enthusiastic number, greeting the coming of a new day.

Gil Scott-Heron was also highly regarded as a New Black Poet, a title he both relished and rejected, he liked to call himself a messenger of his people, a modern throwback to the African griots. To fully capture his poetic essence, Malcolm-Jamal Warner on "Essex/Martin, Grant, Byrd & Till," and Christian McBride on "Peace Go With You Brother," take on the lead roles representing the spoken word. These are critical participants in these songs, for the poetry, with its bare knuckle frankness, lies at the root of this music. Wade picks up on the peace missive, softening the tone, bringing it down to almost a plea, for there has to be a way out of the madness.

If there was ever a perfect song for this record's closure "I Think I'll Call It Morning," is it. The Music of Gil-Scott Heron and Brian Jackson, though identified with political, cultural and racial references of revolution and change, also depicted an immense sense of optimism. This final song portrays just that, that no matter what happens, the sun will rise tomorrow, and with it another opportunity to make the changes and choices necessary for our collective peace of mind.

With this production, Charenee Wade has proven that she possesses courageous talent, and is a singer whose time has come. Choosing to interpret this material was not an easy route, but in the true spirit of a jazz improviser, she absolutely made these songs her own. She recorded much more than a tribute to two exemplary musician/songwriters, it is a resolution that the work continues, it is an Offering.