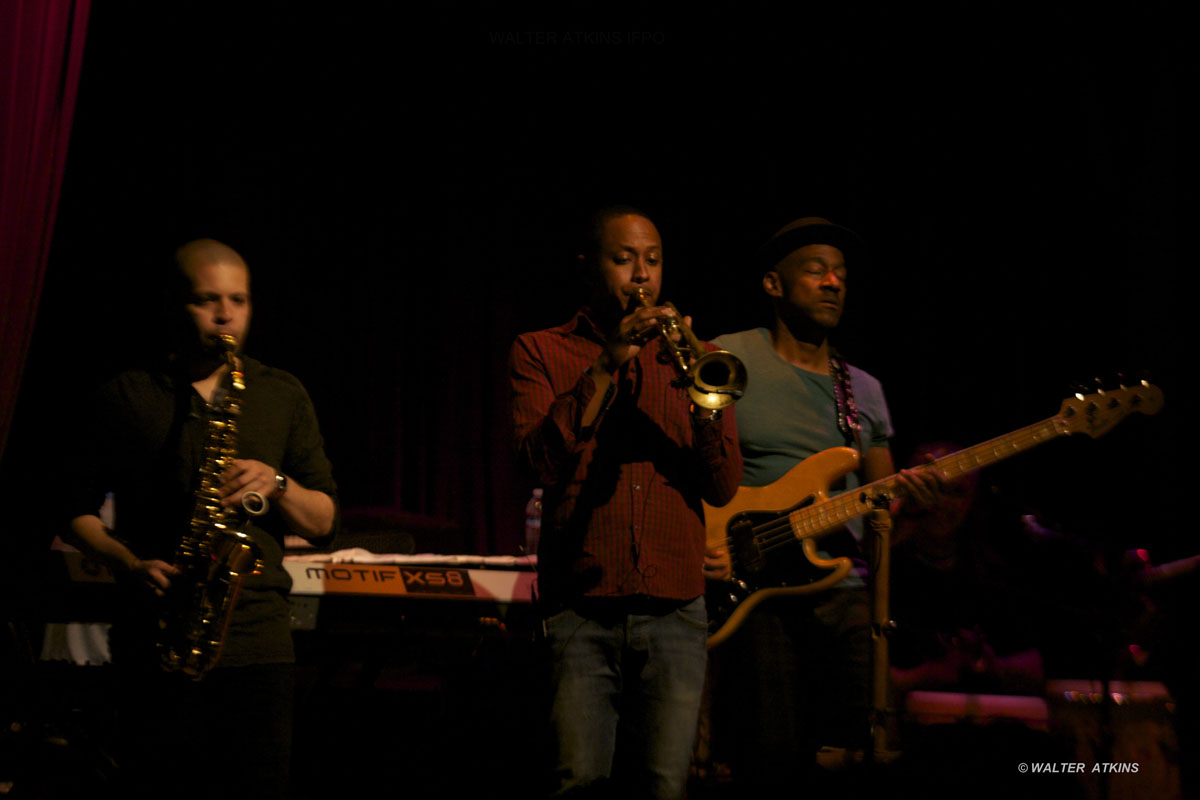 Multi GRAMMY winner and UNESCO Artist for Peace Marcus Miller played five sold out shows with his band over the weekend at Yoshi's Oakland. The set featured songs from his new album Afrodeezia (Blue Note Records) that paid homage to the African people forced onto the slave routes.

The composer and multi-instrumentalist opened Friday night's second session with "Hylife" complete with a stirring sax solo from Alex Han. "Hylife"s melodic jazzy horn flavor was reminiscent of King Sunny Ade, the well-known Grammy nominated Nigerian artist, considered one of the early pioneers of world music. Miller graciously provided ample space for his band mates to explore throughout the evening. Miller's percussionist Mino Cinelu worked with the bassist when both played for a resurgent Miles Davis in the 80s. The prolific bassist said he was "glad to be working with him again."

As a spokesman for UNESCO's Slave Route Project, Miller spoke of Afrodeezia's global reach including his visits to Africa, Brazil, and then going to "big cities" in the United States. Someone yelled "What about West Oakland" a few times. Not missing a beat, Miller asked if "West Africa" was close enough.

He also touched on the opening NBA finals and Lebron James saying, "I pick the Warriors in five." The Steph Curry and Golden State supporters were elated. Ever the diplomat, he added, if this were Cleveland,"I would probably say something different."

On "B's River," Miller slowed things down while Cinelu's percussion solo met warm applause. During the pulsating interplay between drummer Charles Haynes and Cinelu, Miller rocked in place with quiet contemplation. When his moment came, guitarist Adam Agati stretched out on an expressive solo.

Miller stated Detroit was home to great music as he teased the Yoshi's patrons with a taste of the Temptations' "Ball Of Confusion," calling it one of the "baddest bass lines." He continued with the bass line from "Papa Was A Rolling Stone," saying "it was pretty cold blooded" and it "weighs 300 pounds when you play it." Miller segued into Whitfield/Strong's "Papa," and asked keyboardist Brett Williams to come in. Next, he requested some "jazz horns" from Lee Hogans on trumpet and Han on sax. As the crowd clapped to the building rhythm, Miller did a bass solo in his distinctively vibrant and muscular style.

On working with the legendary Miles Davis, Miller said it was hard to understand him. The famed trumpeter was known for his whisper-like speaking voice. On Davis's "Jean Pierre," Miller asked his capable band to "bring it down to A." The gifted bassist said he and Cinelu played the song with Miles in that key. According to Miller, Davis wrote this simple song and could "make simple extraordinary." He told his guitarist "you can't play all the notes, I just want to hear the good ones " adding, "need some fried bologna." Agati responded with some dangerously filthy licks and the band concluded the song on a strong note.

Miller talked about the musical technique called a "sandwich" where music is played between two different songs. We had just enjoyed a "Miles / Temptation sandwich."

The bassist continued his musical/historical globe hopping with a story about Brazil. Music masters George Duke and Joe Sample liked samba and were inspired by it he said. Miller noted the passing of these amazing artists and dedicated " We Were There" to them. Miller's funky bass introduced the swaying song and Williams provided some rolling thunder keyboard work while partially lifting up from his piano bench. The band's reward was more applause.

Miller's "Gorée" was written about the "Slave House" (Maison des Esclaves) on Gorée Island, off the coast of Senegal. Miller said he was standing there looking through the Doorway of No Return with only the Atlantic Ocean in view. Despite already knowing the island's history in the slave trade, he understandably still felt "anger and resentment." The UNESCO spokesman focused on the human capacity to overcome and do wonderful things. During this period, "people could only hold onto their music in the rhythms. The rhythms had "the ability to transcend this difficult situation."

"Gorée" opened with a serene piano introduction and the creative Miller performed a heartfelt solo on a long elegant black bass clarinet. Haynes soft brushwork was wonderful and the horns played beautiful haunting lines to subdued applause. Miller changed instruments for another bass solo. He encouraged the band and its transcendent sounds grew and engaged the rapt audience, while Han soloed on sax. The music was majestic.

During his introduction to "Blast," Miller commented on touring in Europe, "the people were quiet." He felt more comfortable when they made noise.

He shared another enchanting story about the three day Gnawa Music Festival in Essaouira, Morocco where thirty thousand people danced for hours to undulating spiritual music. During his visit, Miller received a gimbri, an early precursor to the bass guitar. It's a Moroccan three stringed bass instrument covered in camel skin and roughly the size of a guitar. According to Miller, it was here "not just to look good" but also to be played. After he finished, Miller admitted to practicing on it previously and returned to his signature instrument. The band continued to rock the popular East Bay venue. Along with Miller's booming bass, drummer Hayes and percussionist Cinela created rhythmic high energy that powered the band through the explosive song. Amid flashing lights and scattered clapping, the pumping band was in full flight with compelling contributions by all.

Miller pressed on with an ominous bass line, and then traded licks with the revved-up Hayes. Miller insouciantly tossed in a Brothers Johnson bass line for extra measure. An exuberant woman danced to a SOS Band bottom rift as Miller smoothly surged into the O'Jays' soulful 1973 monster hit "For The Love Of Money." The closing song generated a standing ovation from the packed house.

Marcus Miller's spellbinding performance catapulted the audience into another place while sitting in the comfortable confines of Yoshi's Oakland. Miller and his dynamic band reminded you of the celebratory and healing power of great music. He also showed how vital live music can be in our lives and the global village.