By Nenad Georgievski
August 14, 2016
Sign in to view read count 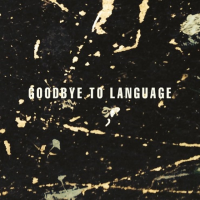 Consistently imaginative, producer, guitarist and sonic explorer Daniel Lanois has long been hailed not only as a studio wizard but as a gifted musician with a definite and unabashed affinity for experimentation and the avant-garde. Lanois is lauded for many things and among those is his uncanny ability to create wonderful music and ambiances from minimal sonic elements.

Goodbye to Language is a deeply beautiful record that redefines the word meditative and shimmers with breathtaking passages of unhurried, received music. Armed with his pedal steel guitar and the studio as an instrument, along with Rocco Deluca on the lap steel he creates a suite of 11 pieces of music. The album touches upon various points in his illustrious career but mostly it brushes closely with Belladonna (Anti, 2006) a record that features Lanois on pedal steel, where he crafts a similarly sounding album.

This album is an expertly crafted ambient album where Lanois suspends sound in a state of constant motion, never finding a natural start or end point. The moods are predominantly somber and mostly inward-facing, with moments of light and beauty scattered throughout. The minimalistic shapes and melodies are stretched out to unfathomable depths. Slowly, these intriguing sounds form into patterns and dissolve slowly. It's as if he is demonstrating the infinite elasticity of sound. And almost each sound possess a sophisticated sonic motion.

Lanois' records are always a fascinating integration of technology, aesthetics and feel. Goodbye to Language is a slowly evolving and subdued affair where this cycle of compositions is like an introspective suite with a quiet sense of drama. It is seemingly simple but it's utterly gripping.