BY BRUCE LINDSAY
December 16, 2010
Sign in to view read count 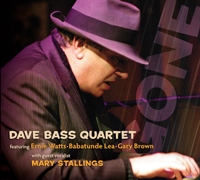 Gone, as pianist and composer Dave Bass reflects in his notes to this fine album, has many meanings: for the Beat Generation, it was a state of mind, but it can also suggest physical absence. Bass himself was gone for 20 years—out of the music business, following a wrist fracture in the mid-1980s. He studied law, eventually becoming a District Attorney in California and then, fortuitously, returned to jazz in 2005.

Before his injury, Bass played in the West Coast jazz and Latin scenes, as well as working with vocalists Bobby McFerrin and Brenda Lee. Gone was recorded over two sessions, one in 2008 and the other in 2009. All but one of the tunes are Bass compositions: he possesses a talent for creating beautifully structured tunes, whether he's drawing from his jazz background or his Latin, and also shows a talent for lyric writing.

"Lost Valentine" is an achingly beautiful ballad, centered on Ernie Watts' terrific tenor saxophone sound. There's sterling support from Babatunde Lea's softly flowing drumming, and a delicate solo from Bass, but this is very much Watts' showcase, as he demonstrates a superb command of tone and mood. "Someday" is a Bass and Watts duet: gospel-tinged, mournful yet uplifting.

Most of the other instrumentals are happier, more optimistic "feel good" tunes. "Since I Found You" is a fine example—Watts again takes the lead, but Bass, Lea and bassist Gary Brown drive the tune along with pace and verve. Bass' Latin influences are to the fore on "Another Ending" and "Mi Guajira," the latter gaining extra groove from Harold Muniz' congas.

Vocalist Mary Stallings, who has worked with Count Basie and Louis Jordan, joins the band for two songs. Sadly, it is only for two songs, because she has a terrific voice—soulful and emotive. Both "Surrender" and "I Bet You Wonder" are late-night bluesy love songs: slinky and sensual. Stallings interprets Bass' lyrics with sensitivity and adds some scat to "Surrender."

Astor Piazzolla's "Libertango" is Gone's solo non-original. A fast duet between Bass and Watts, both play with precision and create some genuine tension. Bass' solo midway through is finely-judged, and his closing piano phrases bring the tension to a pitch before finally releasing it.

Gone is a hugely enjoyable album. The band is uniformly excellent, and both Watts and Bass are in terrific form, while the under-used Stallings is ideally suited to the feel of the pianist's compositions. Bass' return to jazz, on this evidence, was long overdue and is definitely to be welcomed.

LeGrand; Surrender; Mi Guajira; Lost Valentine; Libertango; I Bet You Wonder; Since I Found You; Someday; Carol; Another Ending; Gone.