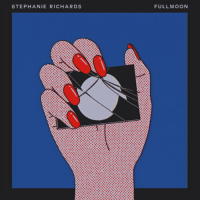 With the release of Fullmoon, trumpeter and composer Stephanie Richards joins the ranks of Susana Santos Silva, Franz Hautzinger, Peter Evans and Nate Wooley. This enlightened group of trumpeters have taken the art of the solo to new heights with various combinations of extended technique, microtonality, free improvisation and electronic/acoustic experimentation. Here, Richards touches on almost all of the above with her inventively deployed playing.

A native of Canada—now a Brooklynite—Richards has worked across genres compiling an impressive resume with jazz leaders such as Anthony Braxton, Dave Douglas and Henry Threadgill, indie performers including Laurie Anderson and Yoko Ono and an array of dissimilar artists from Kronos Quartet to The Pixies and Kanye West. She holds degrees from the Eastman School of Music, McGill University and California Institute of the Arts and is an assistant professor at UC San Diego. Electronics player Dino J.A. Deane, whom Richards met through a mutual association with Butch Morris, is on hand with his sampler.

Fullmoon is highly experimental in nature. "New Moon" and "Snare" are strictly sonic experiments where brass and electronic lines blur; the latter of the two falls into a hypnotic repetitive pattern. "Piano" is a series of pseudo-crescendos, repeatedly rising and falling while "Halfmoon" has an ethereal air about it. One of the few pieces that includes a sustained melody (of sorts) is "Fullmoon (Part I)," but here too the emphasis is on sound inventions and Deane's sampler enhances the atmosphere. Richards imaginatively closes the album by adding percussion to "Fullmoon (Part II)," a darker, more affected piece in comparison to the rest of the collection but retaining the kind of fuzzy logic that pervades the program.

Despite the inquisitive environment on Fullmoon, Richards plays it close to the acoustic nature of the trumpet and flugelhorn letting Deane provide the morphed-in electronic layers. There is less in the way of extended technique a la the sputtering, squeaking salvos of a Natsuki Tamura but that is not to say that Richard's work is not a very challenging listen. Fullmoon is original and will undoubtedly whet the appetite for more of Richards' music.