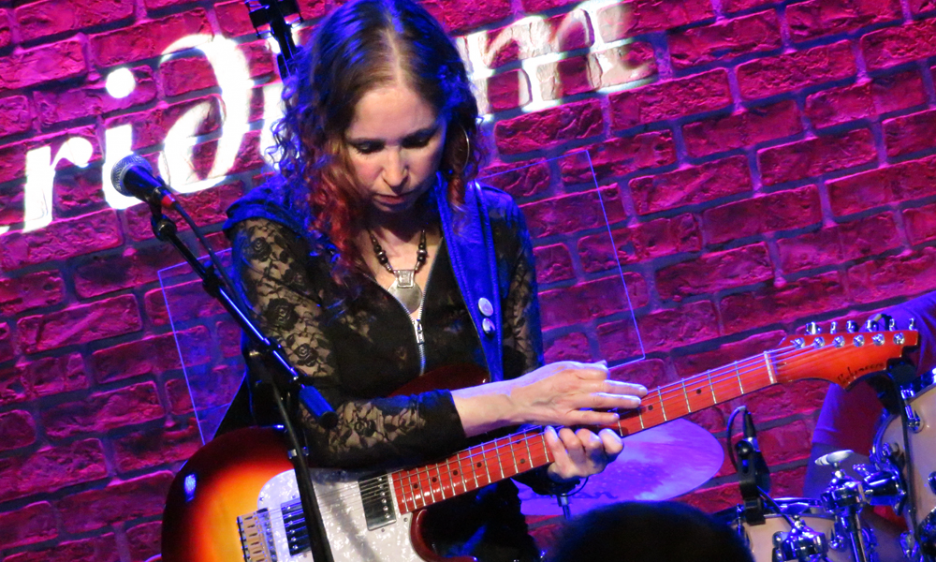 The Jane Getter Premonition's set at Iridium showcased the guitarist/composer's continuing explorations in the area of progressive rock with a set of music that was inventive, volatile, and expertly played. Primarily featuring material from her most recent studio album, On, Getter's band consisted of some of the finest musicians working in the jazz-fusion, funk, and progressive rocks genres, including guitarist Alex Skolnick (Testament), bassist Mark Egan (Elements, Gil Evans), drummer Rocky Bryant (Average White Band), and her longtime collaborator, keyboardist Adam Holzman (Miles Davis, Steven Wilson).

Getter is a powerful and versatile player, and her compositions are complex, sophisticated, and dynamic. Known for years for her work in the jazz milieu, much of the Premonition's music has a heavier, more ominous sound. The opening song "Pressure Point" set the tone of the evening, and exemplified many of the compositional trademarks of this project. Brooding and moody, the pounding riff hooked the audience in, while the odd time-signatures and abrupt changes kept them from getting too comfortable.

Perfectly at ease with sharing the spotlight, she welcomed Living Color guitarist Vernon Reid to the stage for the song "Kryptone," his first of several appearances of the evening. Again, her gift for odd, ear bending melodies came to the forefront with this piece based around a nasty Viking dirge of a riff, continually building in intensity before the band stopped on a dime.

The band functioned like a well-fueled steam engine, locking with each other, deftly handling the intricate melodic lines and sudden dynamic shifts. On "Inversion Layer," from Getter's album Three, the band explored a "whisper-to-a-scream" approach reminiscent of early 70s King Crimson, featuring crunching riffs and a thudding bass line, alternating with delicate, slightly discordant passages. Initially a vehicle for the guitarists to improvise, ultimately the baton was passed to Holzman, who ended the piece with his most blistering synth solo of the set.

For non-instrumental songs, she was joined onstage by Randy McStine, who shared lead vocal duties and sang harmonies. His bright, clean voice cut through the arrangements with great effect. The lyrics, while at times vague and unspecific, fit the mood and the sometimes mournful tone of the music. Songs like "Surprised" and "Alien Refugee" (a new song written about the war in Syria) frequently dwelt on themes of worldly injustices, while "Transparent" dealt with distrust and the artifices of everyday interactions. At their best, in songs such as "Falling," her words guilelessly express a deep world weariness and need to stave off helplessness. "I know that I will get up," she sings, "I know because I always do."

Not to say that there weren't moments of light. Jane's gorgeous solo introducing the song "Diversions," with its clean tone and tasteful use of delay, washed over like crystalline water. As the band joined in, they established a rolling groove, with the intensity building and ebbing with each successive soloist. Moment of driving force balanced by flashes of meditative tranquility.

The band also cut loose a bit with a killer rendition of Jeff Beck's driving rocker, "Led Boots," before ending the set with "Train Man," another musing on social themes, with lyrics taken directly from a homeless man that Getter had encountered. At first soulfully relating the protagonist's pleas for aid and understanding before relating his delusions and hopes ("His book is gonna come out soon... Gonna get rich and die") the song quickly turned into a tumultuous, pounding workout, with Getter, Skolnick, and Reid trading off solos before coming together in a fiery collision. Having thus sufficiently bowled over the audience, the band took a bow and departed the stage.

Returning to encore with satisfyingly funky "The Loop," a favorite from Getter's jazz-fusion back catalog, the players all got a few more licks in, and one more solid vigorous rave-up before leaving the stage for the final time.

It was a set of intense, inventive, searching music, and if there was a motif of world-weariness, it was never jaded or numb. There is a depth of emotion in the music and in Getter's playing, and also an endless supply of energy. Her intricate compositions engage the mind as well, while leaving plenty of room for spontaneity and surprise. It was a remarkable evening of heavy music for thinking people.