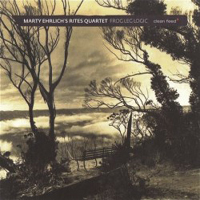 The premier of Marty Ehrlich's Rites Quartet, Things Have Got To Change (Clean Feed, 2009), featured the venerable multi-instrumentalist's engaging originals bolstered by a handful of previously unrecorded pieces by his mentor, the late Julius Hemphill (1938-1995). Drawing on Hemphill's seminal work in the St Louis-based Black Artists' Group (BAG), and his innovative writing for the World Saxophone Quartet, Ehrlich has proven to be one of the legendary saxophonist's most ardent devotees, leading Hemphill's self-titled saxophone sextet after his passing.

Named after a phrase culled from a poem by James Marshal—founder of the St. Louis-based Human Arts Ensemble (with whom Ehrlich made his recording debut in 1973)—Frog Leg Logic continues to expand upon Hemphill's storied legacy, while offering pertinent examples of the leader's own brand of robust lyricism. The personnel of Ehrlich's Rites Quartet has changed since its first album; Ehrlich and trumpeter James Zollar are joined by veteran cellist Hank Roberts and drummer Wynne Alexander, in place of Erik Friedlander and Pheeroan AkLaff, respectively. Ehrlich's commitment to this unconventional instrumental lineup is no coincidence. The Quartet not only mirrors the instrumentation featured on Hemphill's 1972 masterpiece, Dogon A.D. (Mbari), but takes its name from the record's thorny second tune ("Rites"). Ehrlich works subtle variations from this unique formula, conceiving brilliantly contrasting textures between muted brass, diaphanous reeds, sinewy strings and scintillating percussion that transcend obsequious imitation.

Bristling with energy, the session opens with the title track and closes with "The Gravedigger's Respite," bracing, hard bop-inflected swingers that highlight the quartet's adroit, muscular interplay—an aspect further emphasized in the circuitous melody of "You Can Beat the Slanted Cards," which exudes a similarly jubilant swing, hemmed by Roberts' elastic pizzicato and Sarin's taut, in-the-pocket grooves. Despite the ebullience of these rousing numbers, the majority of the date largely eschews the funky ardor of the Quartet's debut, reveling instead in a state of bluesy introspection. "Solace" transposes impulsive energy into a sophisticated, chamber-like atmosphere, dominated by Ehrlich's pastoral flute and Zollar's muted horn.

"Walk Along the Way" and "My Song" weave balladic understatement into expressionistic tone poems, showcasing the group's ability to sustain a mood, which is revealed in the set's conceptual centerpiece, "Ballade." Unfolding episodically, the blues-tinged lament vacillates through time and tempo shifts with cagey precision, modulating from smoldering testimonial fervor to brisk post-bop angularity, recalling the iconic title cut of Dogon A.D. in sound and spirit. Throughout the soulful meditation, Ehrlich's plangent cadences and Zollar's expressive, plunger-muted vocalizations find earthy concordance in Roberts' percolating fretwork and Sarin's unassuming accents.

Released just after International Phonograph Inc.'s acclaimed reissue of Dogon A.D., Frog Leg Logic presents a forward-thinking but reverential variation on an established model, one that not only proves the resilience of Hemphill's visionary concepts, but Ehrlich's merit as a singular composer and improviser of note.

Frog Leg Logic; Ballade; You Can Beat the Slanted Cards; Walk Along the Way; Solace; My Song; The Gravedigger's Respite.