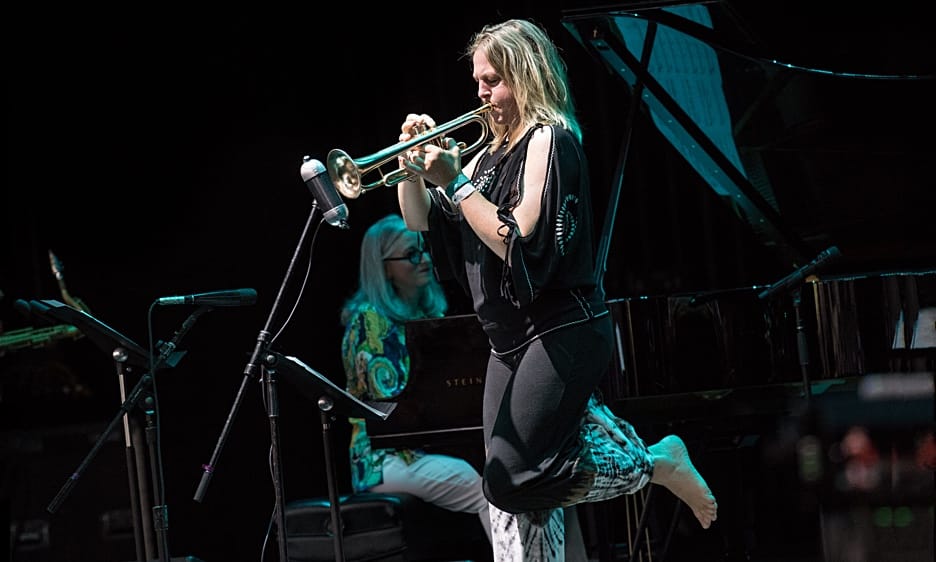 The possibility of Freihofer's Saratoga Jazz Festival returning this year was shaky in the spring months of 2021. COVID was showing signs of remission, but troubles still lingered.

Both Danny Melnick, president of Absolutely Live Entertainment, which produces the festival at Saratoga Performing Arts Center, and SPAC President and CEO Elizabeth Sobol had their doubts, but worked hard behind the scenes, navigating the changing health and safety guidelines and regulations not only of the CDC, but New York state.

But return it did with a bang, musically.

It came back on a much smaller scale than normal. There were six national acts and two local bands that took the stage over two days. The festival always has artists of the highest order, sprinkled with high-powered pop or soul acts. The quality did not drop. If anything, there appeared to be an extra sense of élan. And why not? For these artists, the festival marked their first live gig after the long, dark and dangerous coronavirus lockdown that gripped the world and hit the music industry and musicians particularly hard. The smiles on the faces of the artists and the appreciation they expressed outwardly to Melnick and the audience told the underlying story. It was a visual and audible sign of the glee and relief musicians were feeling.

Music heals. And while recordings are invaluable, it needs to be brought to and played in front of the people.

Attendance had to be limited due to social distancing rules and the hours were also cut back. But there was a great sense of connection—fans to artists and artists to fans. Artemis, John McLaughlin, Al DiMeola, Paco DeLucia, Christian McBride's New Jawn, the Joey Alexander Trio, Cecile McLorin Salvant and Dianne Reeves were all stellar. On the local front, popular musician Garland Nelson—who often fronts a soul and funk unit at venues around the Capital District of New York state, brought a gospel group that played with power and emotion. The Hot Club of Saratoga brought the flavor of traditional jazz, though many solos came from a more modern jazz ethic and were fiery.

Reeves and McLorin Salvant have things in common. They both come from the tradition and can both credit Sarah Vaughan as an influence. Both have marvelous instruments, but their approaches are different and they bring "their own thing" to the table, a trademark of all great jazz.

Reeves is touring with a group that features the music of Brazil, such as the wonderful composer Antonio Carlos Jobim. She covered some other things as well, including a touching version "A Time For Love," in which she brought out every impassioned nuance. Her band included guitarist Romero Lubambo. Is there anyone who, in wanting to do Brazilian music, doesn't look to him first? There shouldn't be. It's his native language and he speaks it with extraordinary elegance. His tone is pristine and his chops are special.

Reeves was dynamic and powerful. Her execution was near flawless, but she showed vulnerability when the lyric calls for it and her scatting (not a great tool for many singers) was in the form of interesting improvisation—not the tiresome "I scat therefore I'm jazz." There's a reason she has had a long, strong career.

McLorin Salvant comes from the same place, but her approach is different. She doesn't scat, but her harmonic and melodic journeys can be magical. The richness of her voice hooks the listener, then she beckons them on the journey and tells the story with a lushness that can evoke melancholy or great joy. The version she sang of "Over the Rainbow" can stand with anyone, Judy Garland and Vaughan included.

One of the most touching songs she sang was when she walked on stage to sing a tune with Artemis. "If It's Magic" is a number she performed on the debut, self-titled, recording of Artemis. It's a Stevie Wonder song, even though most of the band's music comes from its members. She rendered the lyric simply, but with so much fervent grace it raised the hair on one's arms. The arrangement by musical director and pianist Renee Rosnes was great, with the horns of Ingrid Jensen and Nicole Glover adding both strength and poignancy in just the right spot. Hushed backgrounds in other places helped the singer create the magic.

Regarding Artemis, the all-female band released its first CD and was anxious to embark on a tour and further develop the chemistry that the members knew was taking on a special life. The pandemic put it on hold, but the group now has several bookings. While leaders themselves, they collectively meshed like a band that has worked as a unit for a long time. Each was empathetic, with chops galore. The solos were dazzling, Jensen showing why she fits in with so many different group and Rosnes playing all over the keys. Glover took no prisoners. Drummer Allison Miller did her usual fine job of propelling the band and bassist Noriko Ueda grooving like mad.

McBride's reputation as a bassist is well known. He's played so many of the giants in jazz, but his ensembles, from big band on down, are always top notch. This new group, with Marcus Strickland on sax, Josh Evanson trumpet and Nasheet Waits on drums, played music that started in mainstream and stretched those boundaries. Not completely free, but the soloists didn't keep both feet inside the circle at all times. They explored. The bass, naturally, kept it all centered and could also be the springboard to daring group improvisation.

Alexander always seems to celebrate his birthday at the festival. This appearance, his third, was his 18th birthday. He started as a wunderkind and while he wowed audiences—as very young people with talent always do— it wasn't inappropriate to wonder what really lies within him and how far his talent would take him. He was impressive. His playing has matured and he showed not only strong chops, but a mature and thoughtful approach on some of his newer compositions. His was about expressing the composition, not just exhibiting playing ability. The things he played were creative, as were the tunes. Larry Grenadier's bass was always up to the task, going beyond the role of just laying the foundation.

And it can't ever hurt to have Kendrick Scott on drums. Scott is amazing. Like all great drummers, he sets a percussive cushion over which his mates can do their thing. But his thing is always changing. He has a way of adding textures and color, special accents, riffs and percussive wrinkles that are compelling and unexpected. The difficult part—and the part he achieves—is that they are still in service to the music and the spirit of the proceedings, not extemporaneous or showy for the sake of being showy. He's a master at that. It's something he's added to so many fine bands he's been associated with, as well as his own Oracle group.

DiMeola came out looking as mellow as can be. In shorts and wearing a bandanna, he sat himself down with acoustic guitars in a manner that belied his stature as guitar fiend. It would be a solo set. People knew what to expect and he delivered, his fingers racing up and down the fretboard, playing complex music people recognized from older records with John McLaughlin and Paco de Lucia. He spoke to the crowd like he was sitting in their living rooms, at one point tipping a hat to the late Chick Corea, whom he joined at the age of 19 in a little band called Return to Forever.

Garland Nelson's Joyful Noise did more than gospel, though it was mostly that. He's a showman with a strong voice suited to funk and the soul, as well as the source —gospel. His female backup singers were strong and pianist Azzaam Hameed, who's been a staple in the Capital Region for some time, provided great support. Nelson was a bit preachy at times, but no doubt that's part of the presentation. A particular highlight was Annette Harris singing "God Bless the Child" with strength and great emotion.

The Hot Club of Saratoga executed that style with precision. They put the crowd in a good mood and heightened anticipation of what the weekend would become.

The SPAC grounds underwent a major facelift, highlighted by a new multi-purpose building that serves as a VIP section over looking the main stage, but also has room for programming that people will be able to enjoy when the weather turns brisk. The space and sight lines of the grounds are more open and, while modernized, it displays even more the Adirondack-style flavor of SPAC and the Spa State Park within which the facility resides. Kudos.

All the arts are vital to our humanness. But among those, music reigns supreme.