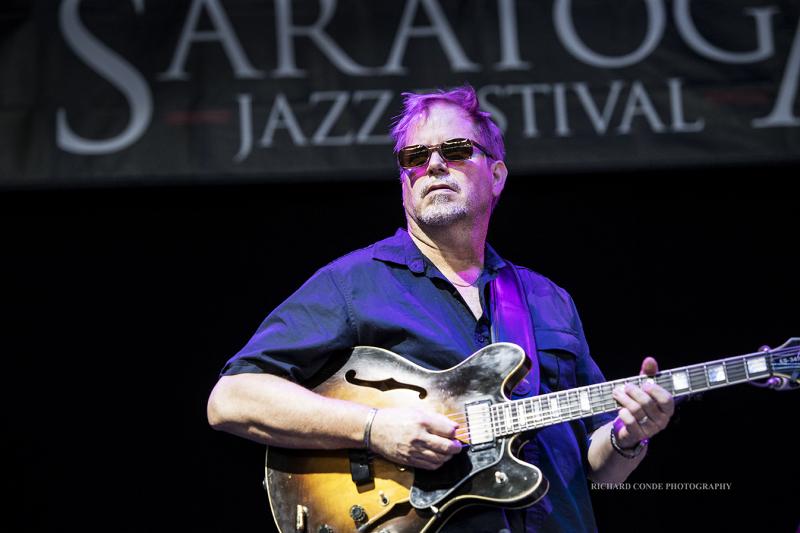 Freihofer's Saratoga Jazz Festival celebrated its 40th anniversary this year and it was done in fine fashion. Acts from the very first festival in 1978 (A George Wein creation) appeared, as well as young up-and-coming artists. The latter has become a staple of the festival. Producer Danny Melnick (who worked for Wein for many years) goes out of his way to present relatively unheralded talent. Usually at a stage—the gazebo stage—toward the rear of the festival grounds, away from the main amphitheater stage. This year, the old gazebo was replaced with a new one. The sight lines and sound are better for attendees, and the stage itself is better for bands.

The festival in upstate New York is an outdoor event held at the gorgeous Saratoga Performing Arts Center. Folks sit on the lawn picnicking, use their amphitheater seats—in an open-air setting under a roof—or catch acts at the gazebo. In fact, they do all three. For 40 years. It was fitting that the opening act was the Dave Stryker Organ Quartet. Not that his band has the biggest name (though his bands are always first-rate), but under blue sunny skies, they established a groove, a vibe, that has been on the grounds that particular weekend for four decades.

Stryker is a wonderful player in the mainstream jazz style. Sweet tone, chops enough to burn down the house when appropriate. He brought with him one of today's top tenor saxophonists, Eric Alexander, and they were bolstered by Jared Gold on organ and McClenty Hunter on drums. Alexander was in great form, a muscular tone, spitting out rapid phrases and funky sounds. Gold's organ hummed and cooked. Tunes like "Amsterdam After Dark" and "Superfly" (yes, that "Superfly," Curtis Mayfield fans) set that grooving vibe. The ballad "Everything Happens To Me" was a sweet rendition and Stanley Turrentine's "Sugar" was special, one that would have made the author, and Stryker's boss for a period of about 10 years, happy

When it comes to pure, hard jazz, no one approached the band Hudson, comprised of greats Jack DeJohnette, John Scofield, John Medeski and Larry Grenadier. They played their asses off. DeJohnette's polyrhythmic drumming showed his power, and his ability to get down and funky. Scofield's angular, soaring lines were as hot as the summer weather, but not over cluttered. Great feeling. The communication between he and Medeski is what group improvisation is about. Often, Scofield faced Medeski's keyboards and the two would trade ideas, feeding off one another. Jazz. Period. They weren't playing jazz tunes. They did some rock covers. The music had an organic, grooved feel. One was injected with bopish swing, the closer "Tony, Then Jack" (reference to drummer Tony Williams, who played for Miles Davis and when he departed, was replaced by DeJohnette), written by Scofield. "Wait Until Tomorrow" was an example of their infectious jazz/groove fusion.

Fusion violinist Jean-Luc Ponty played at the festival in 1978. He returned nearly four decades later and played music from the 1970s and 1980s that he recorded for the Atlantic label. His group was sharp, cranking out searing sounds heard on Imaginary Voyage and Enigmatic Oceans. His playing, at age 76, hasn't lost anything.

A group featuring Danilo Perez, Joe Lovano, Jason Palmer, Josh Roseman, Ben Street, Adam Cruz and Roman Diaz interpreted works by Dizzy Gillespie, Thelonious Monk and Mongo Santamaria. This was not your normal cover band. Each arrangement took the music somewhere else, away from the original. Diz and Monk would have approved. Cruz's drums and the strong percussion of Diaz were prominent throughout. Lovano excelled as always, playing flurries of notes that cascaded through each song.

Cecile McLorin Salvant made her festival debut and sparkled as always. She may have the richest voice in jazz today, gorgeous and sensual. She sang not-so-standards and standards as well. She knows how to bring a listener in with clear, clean sound and beautiful expression of a lyric. Intricate, yet accessible phrasing.

Jane Bunnett has always had a flair for Latin music, and her Maqueque band was terrific. Percussion, voices, and sweet violin from Elizabeth Rodriguez were great accompaniment to her outstanding flute and soprano saxophone. The Suffers, from the Houston area, provided plenty of soul and funk, bolstered by strong horns. Reputed one-man whiz Jacob Collier played several instruments, and overdubbed them on stage using all kinds of technical wizardry. Technology meets R&B. But the music was cold and much of it pointless hyperbole. Music for people who aren't interested in real musicians playing for one another and trying to express heart and art to the people.

Blind Boy Paxton, for sure, expressed heart and soul to the people. A solo act, he played old-style Mississippi Delta acoustic blues. On harmonica, piano, guitar, fiddle and banjo. Not together. Not dubbed. Straight at you. Lyrics were humorous at times, and down home. This cat can bring you back to Lightnin' Hopkins and those greats of yesteryear.

Dee Dee Bridgewater was another performer from the first '78 fest. Her voice is still strong and inviting. She has a theatrical style (she won a Tony award in 1975 for her role in "The Wiz" on Broadway) and it helps her convey a lyric with conviction and soul. She's been a pleasure in jazz for a long time.