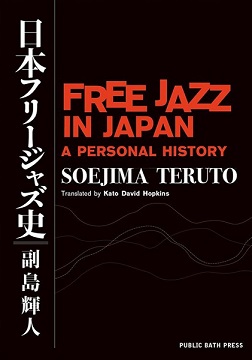 An absolute legend in Japanese free-jazz circles, Soejima Teruto wrote about, lectured on and promoted the music he loved for almost sixty years. This personal account of the birth and development of free jazz in Japan was originally published in Japanese in 2002, and thanks to Public Path Press, now makes an overdue appearance in English, five years after Soejima passed away, aged 83, in 2014.

Soejima dedicated his life to promoting what he calls "an infinitely revolutionary music." His passion and single-mindedness mirrored that of the free jazz musicians he admired and befriended, and for whom he went to extraordinary lengths to support.

From the very first sentence of the book, which describes the bone-shaking power of a 1969 free jazz concert in Tokyo by the trio of drummer Toyozumi Yoshisaburo, bassist Yoshizawa Motoharu and guitarist Takayanagi Masayuki, Soejima foregrounds the sheer intensity of a music that was frequently played in windowless attic or basement rooms, to small though devoted audiences.

1969 was the year, according to the author, when free jazz in Japan began to take off. The beginnings of movements, however, are fascinatingly amorphous, and Soejima traces "the breaking free of the limitations of modern jazz" to the fall of 1962 and the establishment of the Friday Jazz Corner. These sessions in the Ginparis club were run by a thirty-strong collective, the New Century Research Lab, many of whom would become leaders of Japanese free jazz in the following years.

Influenced by contemporary art music movements personified by experimentalist Nam Jun Paik, these musicians' musical concept was perhaps not as clearly developed as its desire to shake things up in general.

In conjunction with a jazz trio playing original music, Soejima recounts the shock tactics of a nude woman bursting through a sheet of washi paper at the back of the stage, or of an artist provocatively smashing glasses and overturning tables. Not for nothing, the author states, the typical Japanese jazz cognoscenti of the day, who were in thrall to mainstream American jazz, regarded these experimentalists "with some alarm." Experimental artists of different stripes gravitated towards venues like Pit Inn—opened by Sakai Goro for the new jazz—which, the author states, convinced the jazz musicians that "they too could be in a vanguard."

With a seemingly casual though penetrating eye, Soejima joins the dots between the spirit of Japan's free jazz practitioners and the upheaval in the values- system that Japanese society underwent in the 1960s and 1970s.

Just as free jazz in the USA—and to a lesser extent Europe—was widely interpreted as a musical expression of the socio-political unrest of the late 1960s, so too in Japan, this anarchistic music seemed to chime with the times. This was an era when Japanese students fought bloody battles with police over Japan's impending renewal of the US-Japan Mutual Cooperation and Security Treaty. Leading free jazz groups, such as Yamashita Yosuke's trio, the author records, were often invited to perform at university campuses in those times of unrest.

Modern jazz criticism went hand in hand with the radical new music, bringing, Soejima writes, "a revolutionary new consciousness." Though a romantic in some senses, Soejima was certainly not naïve, observing that record labels like Victor, Toshiba and Teichuku all recorded Japanese free jazz artists primarily because they cost a fraction of the outlay for foreign artists.

The standout groups of the period are also discussed in some detail. Both Taj Mahal Travellers and New Jazz Syndicate delighted in breaking down musical borders, audiences' preconceptions, and notions of performativity. The performances of the anarchic Now Music Ensemble, relates the author, "were so physical they seemed as if they might throw away their instruments in their madness." Strobe lights and howling feedback were part of NME's armoury, as were turntables, years before they became fashionable, with which they subjected audiences to Albert Ayler records played backwards.

Soejima shares the stories behind the historic venues, milestone events and major personalities of Japanese free jazz. What's more, Soejima is the perfect guide to the music's seminal recordings, many of which he addresses in some detail.

The pictures that Soejima paints of Japanese free jazz are vivid, and credit must go to the book's translator, Kato David Hopkins, for a first-rate job. Numerous colorful anecdotes capture a sense of the spirit and energy of the music.

Memorable is the description of an early morning rehearsal by the Yamashita Yosuke Trio at Pit Inn in February 1969; with snow on the streets and the venue freezing inside, Soejima depicts the musicians' shirts drenched in sweat, and with steam rising from their heads. Then there's a gig by the Takayanagi Masayuki New Direction in Nagisa coffee shop, where the music was so loud, the author recalls, that "the paint on the ceiling, shaken by the vibration, would flake off and fall like snow on the heads of the audience."

Not all the eccentric figures in free jazz circles were musicians. In Om, an avant-garde jazz bar in Tokyo's Koiwa district, Soejima describes how owner Torii Hiroshi would jump on his bar, shout, and throw water or drinks at the musicians if he thought they were flagging.

Much more than just a critic or chronicler of free jazz, Soejima was essentially a free jazz proselytizer. He co-founded and ran New Jazz Hall, which, in addition to providing performance opportunities for many bands, also attracted poets and underground film makers. When an early free-jazz festival in Tokyo proved to be a much greater artistic than financial success, Soejima borrowed money to ensure the participating musicians were paid, and then did hard, physical labor for a year to pay off his debt.

Soejima was known and respected in Europe as well, particularly at the Moers Festival, to which he recommended Japanese bands for many years. For Soejima, Moers Festival was a kind of avant-garde jazz mecca, and his annual visits a pilgrimage of sorts. He filmed the Moers Festival, making annual documentaries on the most happening avant-garde music. Then, in a tireless form of outreach, Soejima showed these documentary films the length and breadth of Japan.

Soejima's sharpest and most detailed analysis is undoubtedly reserved for the first decade of Japanese free jazz, starting roughly from the end of the 1960s. Still of great interest, however, are his thoughts on the music's evolution in the following decades, which saw many Japanese musicians cut their ties with American jazz and turn inward to Japanese culture for inspiration.

Pop and rock began to make itself felt, and Soejima notes the effect of figures like John Zorn and Korean saxophonist Kang Tae Hwan, who brought new concepts to Japanese jazz/improvising musicians. But the music, and the scene, had changed. By the 1980s, Soejima acknowledges, the free jazz of the 1960s and 1970s had perhaps become "old hat." Soejima talks increasingly of "free pop avant-garde" and less of free jazz, as genres ceased to hold any meaning for a lot of the most progressive musicians. Nor arguably, for Soejima.

This dissolution of musical boundaries is niftily summed up in a typically colorful Soejima description of a performance by ShibusaShirazu, a twenty-piece, free jazz big band, complete with drummers and dancers, at the Moers Festival, in 1998: "Like a dragon riding in the breeze the shape of its expression is always changing."

What didn't change over the decades was Soejima's commitment to free jazz and progressive music in general, regardless of the labels. Soejima's absorbing personal account of the fortunes of Japanese free jazz is a valuable addition to world jazz historiography. It also stands as worthy testament to Japan's free jazz pioneers and to Soejima's tireless advocacy of them.