By Ian Patterson
October 21, 2009
Sign in to view read count 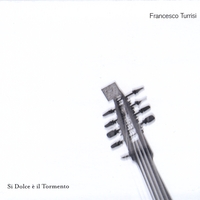 Turin-born Francesco Turrisi has been something of a breath of fresh air on the Irish music scene since arriving on the emerald isle in 2006. In a short time he has earned a reputation as an excellent jazz pianist, percussionist and accordionist; an original voice. He can be found playing in the ebullient Balkan-flavored Yurodny, or Zahr, a group which explores the reach and influence of Arabic music, and Tarab,a group which blends traditional Irish folk music with a cornucopia of Mediterranean flavors. This trio's debut recording is heavily influenced by Turrisi's years as harpsichordist in l'Arpeggiata, Christina Pluhar's much lauded early music ensemble. His passion for the music of centuries gone by is entwined with his personality as a jazz pianist and the result is an arresting and consistently beautiful work.

The album title translates as "sweet is the storm" though, apart from one Cecil Taylor-like assault on the keys, the music is for the most part gently alluring and soothing, with a current of melancholy uniting the pieces. The overall feeling generated is akin to the state induced by contemplating falling rain from the comfort of indoors, with just the occasional rumble of thunder and flash of lightening in the music to quicken the pulse.

On the three minute long title track, Turrisi traces Claudio Monteverdi's well known melody (which dates to 1624), accompanied by Brendan Doyle on clarinet and Richard Sweeney on theorbo, a long-necked lute which brings a courtly elegance to this delicate miniature. Turrisi steps aside to pursue some gently cascading runs, leaving Doyle to carry the melody.

"Salve Regina," whose lyricism follows that of the opener so naturally, sees Turrisi lead a more conventional jazz trio, with Dan Bodwell providing deep, earthy bass and Sean Carpio employing subtle cymbal and rim work. Although there are hints of the influence of early Keith Jarrett in Turrisi's voice at times, he appears to be more heavily influenced by musical periods and moods as opposed to individual stylists. This tantalizing piece, and the equally enchanting first half of "Ciaccona," share a timeless folk element reminiscent of the influential Swedish pianist Jan Johansson's ground-breaking Jazz Pa Svenska (Megafon, 1964).

To this end, Turrisi has more in common with the likes of Johansson, Bobo Stenson, Dag Arnesen, and Stefano Bollani than Jarrett. "Ciaccona" develops into a free-form jazz workout, with Turrisi's formerly lyrical meditations gradually dissolving and veering towards tempestuous abstraction. In the context of the album as a whole it is the storm of the title, which punctures and helps define more clearly the islands of serenity both before and after.

Turrisi is attracted to the short form, and the baroque-sounding "Passacaglia," the pretty "Lamento di Paolo e Francesca," and the unaccompanied "Toccata" all barely top three minutes each. The slightly longer "Canzonetta Spirituale sopra la Nanna," by Tarquino Merula, the only other non-original on the album, sees Turrisi display his credentials as one of the more interesting pianists on the contemporary jazz scene. Whatever the length of composition, Turrisi never sacrifices mood for excessive shows of technical prowess. The occasional extended solos on piano are all the more captivating precisely due to their rationing.

Similarly, Brendan Doyle's contributions on clarinet and bass clarinet are succinct and poignant, particularly on the lovely "Passamezzo Antico," whose haunting melody lingers long after the album is finished. Only on "Variazioni sopra la Follia" does Doyle really raise some steam, unfurling a soft melody at first, which builds slowly but steadily to a bluesy, John Coltrane-esque lament, an impression enhanced by Turrisi's rare use of left hand chords as accompaniment, a la McCoy Tyner. Turrisi, Carpio and Bodwell all solo in turn.

When Bodwell steps into the spotlight, plucking quietly powerful and soulful sounds from his bass strings, the outstanding clarity of production of this CD is really underlined. In fact, the entire presentation of this music from production to packaging shares the class of the ECM label, a comparison which is also felt in the music itself.

In merging the sounds of Italy centuries ago with a more modern approach to the piano, Turrisi is in a way retracing the steps of one branch of jazz, for without the European classical influence so much of what came to be known as jazz would never have come to pass. The success of the music lies in the fact that it sounds both familiar and utterly fresh at the same time. It's a little gem of an album, and Francesco Turrisi is evidently a name to watch out for.