By Mark Corroto
February 11, 2016
Sign in to view read count 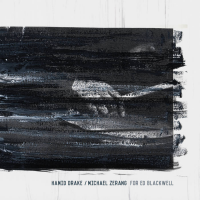 This forty-two minute continuous recording of drummers Hamid Drake and Michael Zerang was released on the occasion of the 25th anniversary performance of their Winter Solstice Concerts in December 2015. The percussionists' tradition of welcoming the return of the sun to the northern hemisphere every December 21st by making music predawn only to be illuminated by the sun rise.

This session happens to be the second day of percussion duets recorded by the pair in 1995. The first being Ask The Sun (Okka, 1995) made two days before For Ed Blackwell. Thankfully, Zerang preserved this tape and has released it on his own Pink Palace label.

Where Ask The Sun comprised eight varying pieces and dozens of instruments, For Ed Blackwell is one continuous composition performed on two drum sets. Drake and Zerang take us back to the rhythm-a-ning of Ed Blackwell and the music that existed before his work in 1950s Los Angeles, with a then unknown Ornette Coleman. Back to Blackwell's roots in New Orleans and the cauldron of sound stirred by African and Caribbean rhythms, and the marches of Western Europe. In other words, jazz, blues, and Creole—parade and dance music.

Both percussionists are well suited to the task. Zerang and Drake are the favored drummers in the bands of Peter Brötzmann, Joe McPhee, and Ken Vandermark.

The energy never lags. The players' focus being the continual propulsion of the beat. The two kits intertwine patterns and tempo for a nonstop parade of sound. The players feed and are fed by each other's energy, a conversation of energy and forward-leaning impulse. From kit drums to snares, the heartbeat is alive. Same for their soloing on cymbals, where a symphony of sound is produced. The pair maintain the "wow" factor throughout this worthy recording.