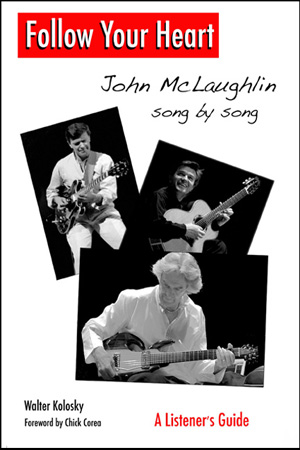 The title of Walter Kolosky's guide to the entire compositional oeuvre of guitarist/composer John McLaughlin captures the essence of what makes McLaughlin tick. Whether alienating jazz purists at the Newport Jazz Festival with the trail-blazing fusion of the Mahavishnu Orchestra, or incurring the displeasure of his record company for his forays into acoustic Indian classical music with the equally groundbreaking Shakti, or whether dividing his legion of fans with his fondness for the guitar synthesizer, McLaughlin has remained absolutely true to his musical vision. The point is not lost on Kolosky, who emphasizes that McLaughlin's chameleon musical personality is part of what makes him great.

Somewhat more than a companion to the music of the influential English guitarist, Kolosky's reader-friendly dissection of McLaughlin's songs will no doubt reunite more than one long-time fan with half-forgotten gems, or music that was overlooked first time around. It should also encourage others, less familiar with McLaughlin, to dip into his substantial and diverse body of music. The passing of time has brought with it new appreciation for some of McLaughlin's music that once divided opinion. Kolosky has long argued the virtues of the latter versions of the Mahavishnu orchestra which recorded Apocalypse (Columbia, 1974) and Visions of the Emerald Beyond (Columbia, 1975) and does so convincingly once again. He also makes a compelling case for reevaluation of McLaughlin's collaboration with Santana, Love, Devotion and Surrender (Columbia, 1973), as well as Shakti's A Handful of Beauty (Sony, 1976), Electric Guitarist (Columbia, 1978) and Belo Horizonte. (Warner Brothers, 1981)

If McLaughlin weren't such a phenomenal guitarist—Jeff Beck has described him as the greatest in the world—it is quite possible that his genius as a composer would be more widely recognized. One of Kolosky's main thrusts in Follow Your Heart is to emphasize what a great, and indeed unique, composer McLaughlin is, and has been, since the release of his first album as leader at the end of the 1960s. McLaughlin, Kolosky reminds us, has fused elements of jazz harmony, northern and southern Indian classical music, jazz-rock, fusion and, at every turn, the blues. It is hard to think of any other composer whose musical palette draws from such a wide range of sources, with such musical ambition and so convincingly.

A measure of McLaughlin's influence as a composer can be gauged by the impressive array of musicians who have covered his songs, a list painstakingly researched and chronicled by Kolosky: solo pianists, acoustic guitar duos, jazz quartets, string quartets, jazz big bands, piano duos, a country rock band, jam bands, fusion bands, a cello octet, and even a surfer band, have all interpreted McLaughlin's music. It goes without saying that a legion of guitarists has been influenced by McLaughlin, including Tommy Bolin, Mike Stern, Jimmy Herring, Jeff Beck, John Abercrombie and Bill Frisell.

Such an extensive list of those influenced by McLaughlin, combined with Kolosky's reminders of the guitarist's early influences—namely Tal Farlow and Django Reinhardt—in effect creates a kind of roots and branches of McLaughlin's musical reach. Nevertheless, it is as a guitarist that McLaughlin is perhaps best known, and the tag of speed guitarist that has tended to follow him since the Mahavishnu Orchestra days does McLaughlin a great disservice, according to Kolosky. Time and again Kolosky highlights the incredible beauty and subtlety that McLaughlin has demonstrated many times over the years.

Kolosky makes astute use of several experts who shed just the right amount of technical light on McLaughlin's compositions to satisfy musicians, but the overriding tone of the book should appeal to the everyday fan. The 306 pages are further enlivened by many black and white photographs published for the first time. In addition, the text includes 40 quotations from McLaughlin. These quotations do not dissect the songs in question, but are rather reflections of a philosophical nature which reveal the inspiration behind the music and, by extension, provide snapshots of McLaughlin the man.

In aiming for the widest possible readership Kolosky's prose occasionally slides into hyperbole, but overall, Follow Your Heart reads like your favorite specialist music magazine, opinionated and exceedingly well informed. Follow Your Heart has already been included in Berklee's curriculum, which is a good indication of its worth. There may be more informative biographies of McLaughlin waiting down the line, but when it comes to McLaughlin's compositions then Kolosky surely has the last word.