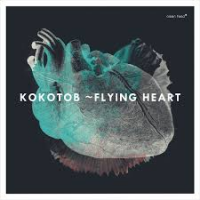 Back in 2006, vibraphonist Taiko Saito teamed up with pianist Niko Meinhold for a duet album entitled Koko (Pirouet), on which they forged a synthesis of classical and improvised jazz music. Here they've added another member, clarinetist Tobias Schirmer, and the trio (now dubbed Kokotob) has produced a deeply pensive, compelling album that relies as heavily on texture and mood as it does on overt melodic gestures.

Meinhold and Saito are each given compositional credit for four of the ten pieces, while Schirmer is credited with the remaining two. The music is certainly carefully structured, with a meditative simplicity that is especially affecting. Aside from the relatively brief "Bikkuri," a stirring improvisation which provides an exuberant interlude of sorts, most of the tracks involve much more subtle development, often through repeated chords or ostinato phrases, typically played by either Saito or Meinhold or both, while Schirmer floats over the top with open, languorous phrases, with an earthy dimension to his playing, often using just his breath for effect. The trio is clearly striving for a collective product that creates a sound rather than a set of tunes; and the emotional effect the music creates is much more important than showy technique or elaborate solo statements.

Each of the tracks evolves patiently and with a delicate arc: "Waldboden" sees Meinhold using the inside of the piano to create an evocative soundscape while Schirmer and Saito gradually tease out the piece's theme, while "Wellen" utilizes rapidly-played repeated notes by Meinhold and Saito to support Schirmer's long, sustained bass clarinet passages, as he builds the tension little by little until he finally releases with a dramatic upper-register flurry to conclude the track. The reliance on minimalist gestures in these pieces allows for a powerful aggregative effect as each unfolds. "Etude in E-flat" is another example of the trio's terrific use of repeated figures, this time at a faster tempo, with transfixing results.

On a couple of the tracks a more obvious lyrical aspect is present, as on the "Origami Im Görlitzer Park," where Meinhold's generous warmth on the keyboard is displayed and Schirmer's breathy clarinet adds appeal. Perhaps the most tuneful piece is "Komodo No Kodomo," invoking a sing-able melody and giving Schirmer an opportunity for a beautiful solo over Meinhold's and Saito's captivating ostinato figures. But more typical is the austere "Feldmännchen," where all three players rely on just a few ideas, and just a few notes, to create an abstract yet somehow inviting musical world.

Although its understated, restrained tone may not appeal to those who like their music to feature explosive solos or attention-grabbing execution, there's a lot of high-quality artistry here, especially for those desiring a more subdued and introspective listening experience.