By KARL ACKERMANN
January 6, 2017
Sign in to view read count 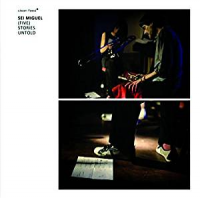 As he did on his two previous Clean Feed albums Suite for a Jazz Combo (2010) and Salvation Modes (2014), Portuguese trumpeter Sei Miguel works with the pocket variety of the instrument and sounds superb in the process. With (Five) Stories Untold he utilizes a revolving cast of players in tempering abstraction with an abundance of lyrical input. This is not to say that the album is anything short of eclectic inventiveness of the highest order.

Miguel is little known outside his native surroundings though he has been active for thirty years and worked with well-known western artists such as guitarist Joe Morris. His style is often one of taking composite ideas and simplifying them to points of minimalism or mystery. On (Five) Stories Untold he works in a core duo with trombonist Fala Mariam who appeared on both of the aforementioned albums. Nine additional musicians add to the formation on a track-by-track basis.

"Asterion" is a trumpet and trombone duo; a low key excursion where Mariam alternates her trombone between melody and drone effects. Miguel strikingly uses his trumpet in sharp bursts to cut his way out of long pauses in the music. The unembellished elegance of "Abrigo Dos Pássaros" is due—in large part—to Moz Carrapa's acoustic guitar providing a backdrop through which Miguel and Mariam interact in a crystal clear trio discourse. The computer of Carlos Santos adds a peculiar, somewhat eerie feeling to "Os Céus," an otherwise duo piece. Santos remains on board for the more abrasive "Oito Lançamentos para Pedro Caveira" where Miguel plays in the upper register, contrasting Mariam's deep growls. Reeds and flute bring the formation to a octet for the closing "Sentinela" but even at its most full-voiced, the ensemble exudes minimalism.

(Five) Stories Untold has an almost intangible appeal in its avant-garde melodicism. The live recording can be stark or warm at turns while consistently unconventional throughout. While the billing may favor Miguel, this is equally a showcase for Mariam who guides her difficult instrument through some very long and complex improvisations. It's a rewarding album and the duo deserves some long overdue recognition.