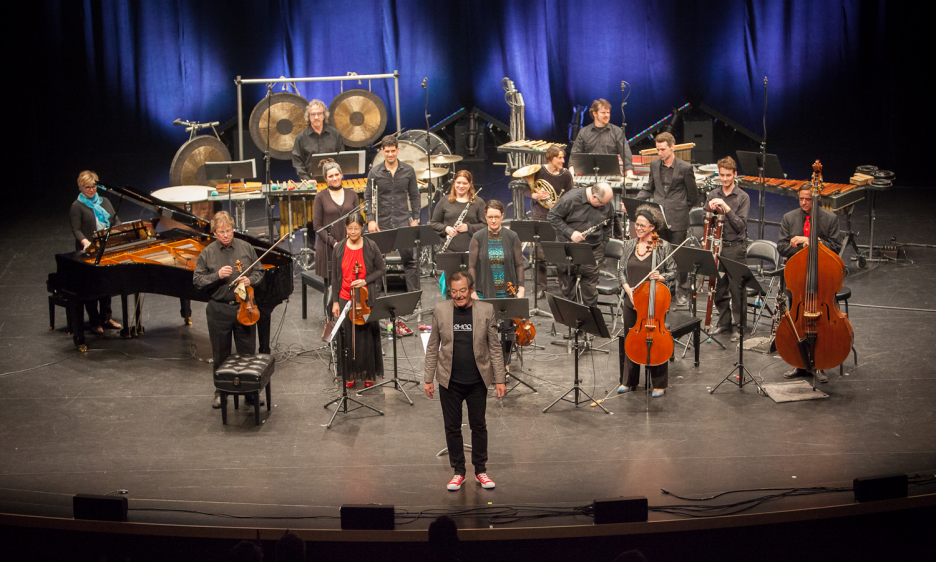 Keeping a middle-aged festival such as the Festival International de Musique Actualle de Victoriaville fresh and relevant is a challenge, but the program for this year's 34th edition of FIMAV assembled by artistic director Michel Levasseur had something more of an avant-garde and international flavor than we have seen in recent years. Prominent in the schedule are Asian musicians and Asian-influenced music as well as a large number of female performers, making this year's edition one of the most highly anticipated of the last twenty years.

As usual, the opening evening's menu of three concerts featured musicians from Canada and Quebec, starting with a double concert of the music of Montreal-based composer Walter Boudreau, an icon in the world of contemporary classical movement for the last half century and the artistic director and principal conductor of the Ensemble de la Société de musique contemporaine du Québec (SMCQ) since 1988. The first part of the program was a performance of "Paix," one of Boudreau's first major compositions, by a group of young musicians called 333ToutArtBel, while the second featured Boudreau conducting the SMCQ in a performance of "Solaris (Incantations VIII-IXh), a composition from 2012-13 in the new concert hall of Victoriaville's cultural center. The first piece showed the obvious influence of Frank Zappa on the young Boudreau and his seminal group L'Infonie, while the second piece was very much in the line of Messaien and Boulez.

The second concert was a project by Taiwanese-Canadian musician and composer Lan Tung, who brought together a group of Taiwanese musicians playing traditional Chinese instruments with members of the Vancouver avant-garde scene such as Ron Samworth and J.P. Carter. Because Tung is deeply involved in both musical communities, the presentation of what she calls "The Giant Project" could have sounded like a forced marriage, but it did not, Tung having achieved a balance between the two musics. The music was fast-moving and dense, and if there was anything else I would have enjoyed hearing from them, it was more space for the Chinese instruments. But that is a small quibble.

The final big group show of Thursday was a midnight performance by the Montreal ensemble David and the Mountain, a project led by drummer, guitarist, composer, scene-maker David Douglas Dion. The performance started compellingly enough but the long middle section of guitar feedback tried the patience.

Friday's program began at the usual 1 p.m. in the beautiful Eglise St-Christophe d'Arthabaska with a solo voice and viola performance by the Swiss artist Charlotte Hug. Hug entered from the back of the nave, emitting vocal pops as she entered the space. The audience members were reverent (no pun intended), as Hug gradually took over the church space, playing with its acoustics, vocalizing while employing extended techniques on her instrument, including using a bow from which she could detach the strings. While Hug is neither Asian nor attempts to play Asian music, her performance practice was informed by her recent experience of studying in China. The performance was charming, captivating, and compelling. Most of the music was improvised, apart from the entrance and exit pieces, but somehow Hug created a kind of narrative arc that was full of drama and surprise. One of the best concerts I have ever seen at Victoriaville.

Friday afternoon's 5 p.m. concert in the Colisee B of Victoriaville's hockey arena was the world premiere of a trio comprised of Malcolm Goldstein on violin, Rainer Weins on guitar and thumb piano, and Liu Fang on pipa. Goldstein and Weins have collaborated off and on for many years, and Goldstein and Fang have been playing together in the past decade, but this was the first time that the trio had played publicly. This performance felt like an intimate encounter of close friends, delicately balanced, with Fang playing the foil between Goldstein and Weins.

The 8 and 10 o'clock concerts on Friday were presentations by old friends of the festival, the Rova Saxophone Quartet and William Parker's In Order to Survive. The Eglise St-Christophe d'Arthabaska was a perfect setting for Rova, as Jon Raskin, Larry Ochs, Steve Adams, and Bruce Ackley as the acoustic possibilities of the space created shimmering overtones that enhanced the complexity and balance of the music. In Order to Survive attracted the largest audience of the festival so far, this being the first opportunity many had had to see the re-constituted group, with Hamid Drake and pianist Dave Burrell (subbing for Cooper-Moore on this occasion) joining Parker and alto saxophonist Rob Brown. It is always a joy to see Parker and Drake playing together, and in the context of Parker's project, their playing was as free-flowing as one would ever hear it. Burrell was subbing, but his interventions were always pointed and provocative, and he sounded like he had been playing with the group for years.

Friday's midnight show was the Swiss trio Schnellertollermeier, a kind of minimalist power trio of guitar (Manuel Troller), bass (Andi Schnellmann), and drums (David Meier), whose tense, insistent rhythms were delivered at high volume, a fine way to kick the festival towards the Saturday and Sunday part of the schedule, which will feature a number of loud and abrasive (I mean that in a good way, of course) performances. You can read my festival wrap-up here in a couple of days.