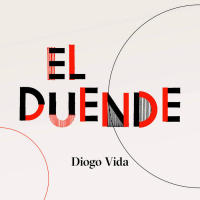 El Duende derives from the duende of Spanish mythology, an elf or magic creature. When the term is used in connection with music, especially flamenco, it means "having soul," something that gives you chills, makes you smile, or even cry, in response to an artistic performance. The Spanish poet Federico Garcia Lorca described it thus: "The duende climbs up inside you, from the soles of your feet."

Portuguese pianist Diogo Vida says it describes the feeling he gets playing with his trio and "embraces everything that I enjoy and that made me what I am today."

After completing his studies of classical piano at the Lisbon Conservatory, Vida played in various jazz and pop constellations before forming the trio. Yuri Daniel, his bassist, is also currently part of Norwegian saxophonist Jan Garbarek's band, while drummer Vicky Marques is a main plank of the rhythmic foundation upon which rests Fado superstar Mariza

Vida says the music on this album is "a result of my personal and musical experiences: although its melodies and harmonies are deeply rooted in contemporary jazz, it winks at flamenco, rock, classical and electronic music."

"Decision," the opener, is what it says it is: a decision by Vida to quit writing and start playing. Powered by Marques' drumming, the number succeeds magnificently. By contrast, "Arpeggione," reliant on arpeggios, is irritatingly repetitive.

"Duende" comes as a relief. You can almost see the mythical elf dancing on the keys. Daniel's electric bass solo picks up where Vida leaves off but then the leader is back, pushing his composition to its limits, Marques right up there with him.

"Kembee" is a pretty tune, solidly anchored by Daniel's bass. Vida takes it out neatly. After this there's duende aplenty, right through to the closing number, "Vendaval," which means "gale" in Portuguese.

El Duende is a rarity -an album that lives up to its name.