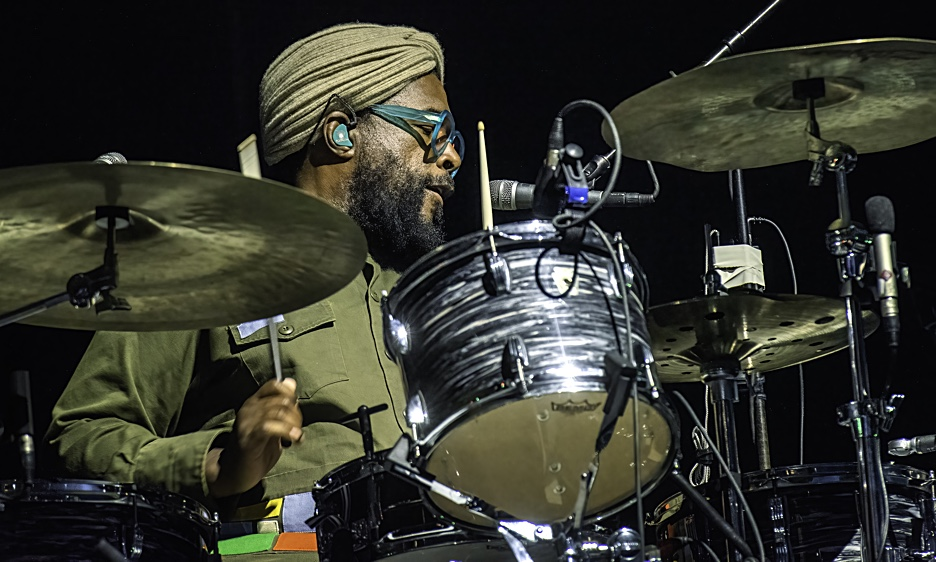 All hail the return of live music! After a three-year break imposed by Covid-19, the Festival International de Jazz de Montreal (FIJM) was back this year with a scaled-down but user-friendly slate of 350 concerts, about 2/3 of which were free.

This was a year of transition for the festival, now under new management. In the past, the festival has received a fair amount of criticism for its marginalization of jazz, or for its ghettoization of jazz in venues that charge serious money for concert tickets. In happy contrast, this year's program featured a large number of honest-to-goodness jazz performances free to the public, both on outdoor stages and in concert halls. For instance, the main outdoor stage, Scene TD, presented performances every evening at 6:00, featuring vocalists such as Samara Joy, Laila Biali, and Laura Anglade, and then a gala performance at 9:30, with artists such as Lee Fields, Kamasi Washington, and The Roots performing on the street in front of crowds of 50,000 and more. Le Scene TD, the newly-renamed club in the Maison du Festival (home of the press room and festival archives), also presented free concerts, at 6pm and 10pm each evening. How about seeing Julian Lage with Scott Colley and Dave King, or Irreversible Entanglements with Moor Mother, for free, in a club? In fact, one could have a great festival experience without ever attending a paid concert.

Another factor making the festival a better experience than in the past was the layout of the festival site in the Quartier des Spectacles in downtown Montreal. Moving around the site was easier than ever, and the addition of food trucks expanded what used to be meagre food options, this in a city known for its food. Both have improved the festival experience significantly.

Planning an evening of festival-going and getting to see everything you wanted was also made easier by the schedule, such that one could catch a free performance at 6:00pm at either le Studio TD indoors or at the big outdoor stage le Scene TD before heading two blocks east to the blues stage for a top-notch blues performance at 7pm and then around the corner at 8pm to the fabulously-appointed and awkwardly named Traversée Molson Export for some edgy jazz. Artists including Allison Miller, Immanuel Wilkins, Vincent Peirani, Takuya Kuroda, and Connie Han led groups in performance at this stage over the course of the festival. After grabbing a bite and a beverage and listening to the music at the Molson Export stage, you might want to make your way two blocks up Ste-Catherine Street in front of Place-des-Arts to the Rio Tinto stage for the second half of the 8pm performance to check out one of the artists in the Groove series.

So, that would leave you standing on the street at 9pm with one mission: securing a good spot to watch the big free show at 9:30. This was the outstanding presentation of the entire festival, a series of free concerts that featured performances by Kamasi Washington, Lee Fields, Bran Van 3000, and The Roots, who closed out the festival with a 90-minute set in front of about 80,000 people on July 9. The big Scene TD stage is situated in the heart of le Quartier des Spectacles, with the Musee d'Art Contemporain de Montreal on one side and the National Film Board and Maison du Festival buildings on the other, with a whole roadway and half a city block in between for various sorts of people places, including a section of the street that contains sprinklers that are opened up during the day for kids and adults in need of a spritz. The space apparently holds more than 100,000 people, and remarkably, clears out very quickly, even with such a large crowd. The construction of le Quartier des Spectacles has wrought a remarkable transformation of that part of downtown Montreal. The design has been inventive and thoughtful, and it has made attending the jazz festival an easier and friendlier experience.

The 6pm Invitation series at the acoustically impeccable 400-seat Salle de Gésu had three-night stands by drummers Makaya McCraven and Terri Lyne Carrington followed by a three-night series of more traditional jazz to close out the festival. Carrington's last evening, July 6, in which the invitee was pianist Kris Davis, was in certain ways emblematic of what was so hopeful about this year's edition of the FIJM, as it featured basically three generations of musicians, including Carrington's young Social Science bandmates, all women, except for one, playing highly adventurous music that virtually everyone would identify as jazz. [Apologies for not knowing the names of all the musicians. There was no "bible" of musicians who appeared in each concert available to the media this year, and it was impossible to catch the names of all the musicians when they were announced from the stage.] The highlight of the performance was a 20-minute extended version of Davis's "Diatom Ribbons."

Thursday night's performance by the Django Festival All-Stars, featuring the accordionist Ludovic Beier, was full-on about virtuosity in a repertoire established 90 years ago. The group's rhythm guitarist was so new that he had just met the band at the sound check. It took a few songs before he found his way in, but from then on, it was clear sailing. Friday was a relaxed, familial excursion by the Brubeck Brothers Quartet. The group, led by drummer Dan Brubeck and his brother, bassist Chris Brubeck, played a set of compositions by father Dave Brubeck and by members of the group, which also included pianist Chuck Lamb and guitarist Mike DeMicco. The concert was a two-year delayed centennial celebration of Dave Brubeck's life and music, but it also spoke to the joys of a family in music. Finally, Saturday night's concert was an 80th birthday celebration for Montreal bassist Michel Donato, a stalwart on the Montreal jazz scene since the 1960s, and a good friend of the festival, having performed many times and who, with pianist James Gelfand, gave lessons at "La Petite Ecole de Jazz" as part of the festival for many years. Many of Donato's musical confreres from over the years played pieces in his honour and some told stories about Donato. It was a fitting tribute to a fine musician and a gem of a man.

One of the more popular series was the 10pm free indoor performance at Le Studio TD, typically full when performances started. Standouts over the final five days were Tuesday's performance by Irreversible Entanglements with Moor Mother, tense and intense electronic and hip-hop infused free jazz, and the set by Brooklyn-based singer Melanie Charles, who combined elements of jazz, hip-hop, electronica, and Haitian music in a totally organic manner.

Finally, a few words about Robert Glasper and Kamasi Washington and the Roots and what the 2022 edition of the Festival International de Jazz de Montreal says about the state of jazz-influenced music today. At the beginning of Glasper's concert with the Robert Glasper Experiment at Theatre Maisonneuve on July 6, he was awarded the festival's Miles Davis Award for 2022. This was as fitting as an award can be, given the way in which Glasper's music crosses stylistic boundaries. The Roots fuse funk and reggae and soul and hip-hop and jazz into a raucous, danceable mix, and their closing night performance fuelled a street party for 100,000 people. Kamasi Washington, as big a star as there is in jazz today, performed a thrilling set of forward-looking jazz in front of a similar number of people of all ages a week earlier. What is special about this? It's that the festival organizers, by putting jazz front and center in the program and by presenting a large number of free performances by artists who are unarguably jazz musicians, put the jazz back into the jazz festival, and when you can reach twenty-somethings with the music, you can ensure a bright future for the festival and for the music itself, one hopes.