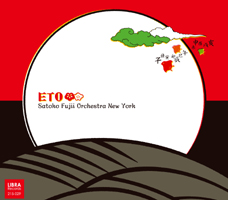 In addition to an ever-changing array of small combos, tireless Japanese pianist Satoko Fujii continues to lead four international big bands, each based in a different city (Kobe, Nagoya, New York and Tokyo). Of the four, her New York based Orchestra is both her oldest and most prolific, having maintained virtually the same line-up since 1997. ETO, dedicated to her husband, trumpeter Natsuki Tamura on the eve of his sixtieth birthday, is the Orchestra's eighth recording.

A milestone event by the standards of many cultures, turning sixty in Japan is honored with a symbolic rebirth celebration called "Kanreki." Inspired by traditional Japanese use of the Chinese zodiac, the album's titular suite comprises 14 sections; an opening and closing theme bookends 12 focused miniatures named after the animals of the Chinese zodiac, with each interlude spotlighting a different member of the band as primary soloist. The brief vignettes that encapsulate the episodic suite's various sections embrace a dizzying stylistic range, exploiting Fujii's skills as a composer as often as her sidemen's interpretive prowess—frequently in unaccompanied settings. Veering between extremes, Dave Ballou's lyrical trumpet ruminations on the Duke Ellingtonian "Hare" offer stark contrast to Curtis Hasselbring's vociferous muted trombone musings on the brooding "Dragon," while Ellery Eskelin's elliptical tenor cadences pirouette through "Tiger" with nimble restraint compared to Briggan Krauss' bristling alto tirade on the climactic "Boar." Tamura, the dedicatee of the extended work, contributes a commanding performance on "Snake," unfurling coruscating glissandi that blur the line between expressive vocalisms and pure abstraction.

The remainder of the record is girded by three intricate pieces employing dynamic shifts in orchestration—providing thematic consistency with the dramatic interplay between ensemble charts and spare soliloquies that dominates "Eto Suite." The regal opener "The North Wind And The Sun" introduces the date with a string of meditative solos punctuated by swelling tuttis, foreshadowing the vast aural spectrum explored in the album's lengthy suite. "Pressure Cooker" and "Stroll" conclude the session in a similar fashion. The muscular riffing and locomotive rhythms of the former is bolstered by animated brass excursions from trombonist Joe Fiedler and trumpeter Frank London; the latter trades visceral intensity for austere introspection, closing the set with a sophisticated fusion of stately themes and aleatoric impressionism.