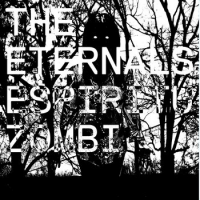 Adventurist listeners want more from their music. That's why they venture into jazz, world, and improvised music. If you were a fan of the Talking Heads in the 1970s and 80s, the band's expanded lineup of backing singers and percussionists, plus keyboardist Bernie Worrell and guitarist Adrian Belew propelled the band out of its new wave niche and into an African flavored global sound. Same can be said for Chicago's The Eternals. Originally a duo of Damon Locks and Wayne Montana, formed from the remnants of Trenchmouth, a midwestern cousin of DC's Fugazi, The Eternals have expanded into a ten-piece ensemble to produce the Espiritu Zombi suite.

The vibe here captures the African diaspora in jazz/rock, funk, tropicália, soul, and psychedelia. They might be best described as a cross between the Antibalas Afrobeat Orchestra and Rob Mazurek's experiments in Mandarin Movie and São Paulo Underground. Each piece of their zombie spirit puzzle delivers a powerful message of a post-apocalyptic world over a danceable rhythmic beat.

The aforementioned adventurist listeners may come for the message, but stay for the music, or come for the music and stay for the message. Adasiewicz adds his vibraphone and horn arrangements for Berman, Leoine, and Mazzarella. All are well proportioned and groovy-heavy. The nine tracks flow from chorale opening to the afro-beat section, to the pop hooks, and some tightly arranged horns that spill out into improvised thunder of driving bass and percussion. Listening to