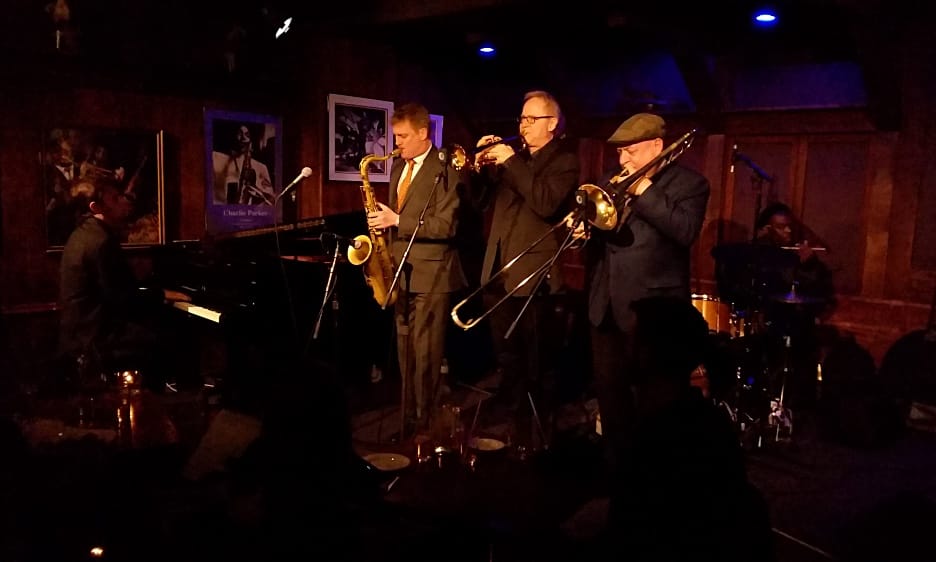 This first set on the second night of a two night stand with a packed house featured three superb and well-known hard bop masters backed by a local rhythm section called the Philly All-Stars (a young Joe Block on piano, seasoned and adaptable Mike Boone on bass, and much in demand Sonny Fortune alumnus Rodney Green on drums). This reviewer found out about it at the last minute and rushed out to hear three of the finest horn players in the business. He was not disappointed. It was a sheer pleasure to hear musicians who have mastered the hard bop literature and play with a panache that made their complex solos and well-coordinated interactions seem easy to execute. It was like going to Birdland in the late 1950s to hear the inimitable Art Blakey and the Jazz Messengers with Benny Golson and Lee Morgan. The group at Chris' had their own style, but their sense of total mastery of the hard bop idiom harked back to that time.

Tenor saxophonist Eric Alexander, trombonist Steve Davis, and trumpeter John Swana don't often perform together, but they made their mark some years ago with Swana's iconic album In the Moment (Criss Cross, 1996) (which also included Kenny Barron on piano, Peter Washington on bass, and Kenny Washington on drums). They vary in their approaches, but they chose standards from the hard bop era that brought the whole set together in a coherent and energetic way.

The set was preceded by the presentation of Chris' Hall of Fame Award to its founder, Chris Dhimitri, a restauranteur and veteran of the the jazz club wars, who made the club the most important in the city. Kelly Lee, head of the Philadelphia Office of Arts, Culture, and the Creative Economy, presented the award, while Mark DiNinno, the current owner and sous chef, looked on. By this time, the house was packed, a nice thing to see given the struggles jazz clubs have to stay afloat these days.

The set consisted of hard bop standards, beginning with "Firm Roots," an upbeat Cedar Walton composition that tested the agility of the players. Benny Golson's "Along Came Betty," one of the most frequently played tunes of that era, gave Alexander an opportunity to deliver an exceptional tenor sax solo in his inimitable sharp, tight, yet melodic sound. He employed every kind of variation imaginable, encapsulating a short history of jazz as he bounced around the horn wherever the moment took him.

Horace Silver's "Jody Grind" provided a nice change, incorporating interesting chord changes deriving from Silver's ties to Cape Verde and his trip to Brazil. On this tune, bassist Boone's ecstatic solo was masterful and captured Silver's intent entirely. Then Davis and Alexander took a break, and Swana with the rhythm section provided a laid back version of "Stella by Starlight." Swana suffered a lip problem some years ago and took up valve trombone and EWI (Electronic Wind Instrument). He still uses them on some gigs, but he fully recovered his trumpet embouchure and delivered one of his inimitably sophisticated solos, complemented nicely by Block's unaccompanied piano solo. This pianist is one to watch. He combined a rich classical sound with Oscar Peterson-like resilience and throughout the evening came up with brilliant turns of phrase just when they were called for.

The set concluded with Kenny Dorham's familiar "Straight Ahead" for which Alexander provided a Zoot Sims-like sound. Swana delivered one of his virtuosic solos with his subtle yet awe-inspiring harmonic changes, and Green's drums came on with a hard-driving backup and solo that brought an outstanding set to a solid conclusion.