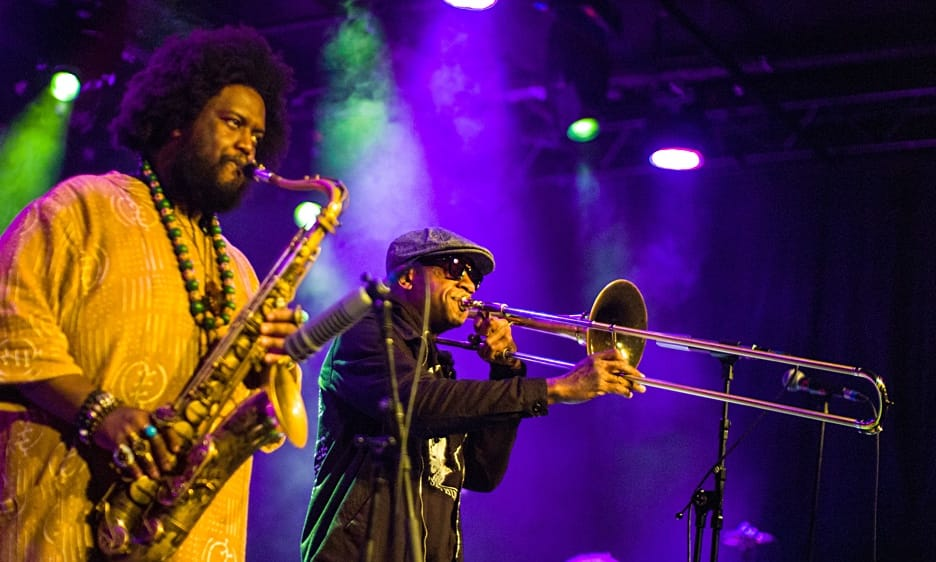 The Enjoy Jazz festival always offers an exciting array of venues, switching locations virtually every night of its six-week run, and often providing the chance to creep inside a range of historic buildings in its three-city spread. Gigs are divided between Heidelberg, Ludwigshafen and Mannheim, all of which are in easy reach of each other. Sometimes there are even two or three concerts on a particular evening, around the different cities.

The Kinan Azmeh City Band played at the University Of Heidelberg, in an ornately wooden assembly hall that merged the qualities of a church and a government chamber. The gig was postponed by a day due to clarinetist bandleader Azmeh winning an Opus Klassik award for his Uneven Sky concerto, attending its presentation ceremony on the originally booked date .

The other three band members are Kyle Sanna (guitar), Josh Myers (bass) and John Hadfield (drums). There was a feeling of particular intimacy, as the frontal seats (more like pews) were arranged to the left and right of the stage, embracing the players closely. The acoustics of the vaulted space also made it easy for the audience to meld with the musicians. Azmeh was born in Damascus, but gradually ended up living in NYC, although not without some sluggishness at the JFK immigration counter. He formed this band in 2006, setting out to combine Syrian and Arabic traditionalism with jazz, and sometimes sounding very klezmer-ed.

Sanna kept his guitar volume down low, but with a tautly snapping string-action, sympathetic with a mind's-eye oud. Myers swapped between acoustic and electric bass as each tune arrived. Hadfield rapped a small frame-drum in tandem with running his bundled rushes around a conventional drumkit. On another number he matched frame-drum with cajon, for maximum resonance. The quartet's beginning was calm, but Azmeh steadily worked up a clarinet solo, before teasing with a receding. His material is original, although steeped in a folkloric marinade. The finale was provided by "Wedding," which was Azmeh's vision of a madcap celebration, hard-assed, high-speed, and with a complex drum solo freak out, to boot. Then, once we were sure they'd all peaked, there was still time for a romping encore.

Two nights later, the duo of Cameroonian Richard Bona (electric bass) and Cuban Alfredo Rodriguez (piano) appeared at the Friedenskirche in Ludwigshafen. Not quite as old as the university, this circular modernist church was built at the beginning of the 1930s, and must have looked extremely futuristic at that time. Even though the musical relationship between Bona and Rodriguez is slick and smooth, and the humour in their verbal exchanges quite mainstream in nature, the concert's content succeeded in being entertaining as well as substantially involved on the technical front. Rodriguez acted like Bona's stooge, but still filled most songs with liberal doses of pianistic note-showering, at a high virtuoso level. Bona was equally flashy on bass, high vocals and looping pedals. The pair disrupted the set at a too-early stage, by banishing each partner and playing solo for a while. They should probably have devoted more time to establishing the duo music before splintering off in different directions.

It was far preferable to witness Bona's Mandekan Cubano band, virtually across the street, two years previously, but with these two players, it was still difficult to deliver an inferior set. The problems arose via selection of material, jokey (sometimes irritating) presentation and a general over-confident, throwaway attitude on the part of Bona. There was lightweight blandness, cosy self-love and some tedious banter on cultural qualities of Cuban and German folks, but we still enjoyed the musical core, thankfully.

Another three days later, and the route had changed to Mannheim, and its wonderful venue, Alte Feuerwache (old fire station), for an all-standing session with trombonist Ryan Porter and The West Coast Get Down, from Los Angeles. Feuerwache is another impressive building, this time built in 1912, with many of its chunky fittings still in place. Sometimes, the festival puts out rows of chairs, but the venue is at its best when the audience is completely free to mill around, or even dance.

Porter's a vivid raconteur, with a genuine audience rapport, as he guided the crowd through the storylines of his tunes (and there's always a strong anecdotal background, or a symbolic resonance). Porter had the space meditation of "Mesosphere," the dancing-to-Oscar-Pettiford of "Oscalypso," the Mandela-walks-to-work of "Madiba," always with 'bone solos a-go-go, a raspy bounce, agile poise and tearaway grace. Oh yes, the concept of the Get Down is that it's virtually a combo full of bandleaders, but depending on who steps to the front, a different emphasis arises. This means that tenor man Kamasi Washington became a sideman, although unavoidably dominant in this role. His solos sprang from a more rugged quarter, particularly the two or three occasions where he took matters right out to the furthest zone of wildness, squealing out his freedom. When working together, Porter and Washington kept it tight, just like when they worked as Snoop Dogg's horn section. Also coming forward to debut his new number, "Brother," bassman Miles Mosley had his chance to front the outfit, with soulful vocals and distorted bass bowing. A 90 minute set didn't flag at all, and this was one instance where it was the best decision to keep on playing, and not interrupt the flow with an intermission.

Back in Heidelberg, there was a chance to catch a gig outside of Enjoy Jazz, when Woodoism played at the Deutsch-Amerikanisches Institut. Jazzclub Heidelberg (run by Volker Haunschild) present a (mostly) monthly gig here, in the relaxed atmosphere of an upstairs room: chairs in rows, makeshift bar, low-level semi-circular stage (with rear drapes) and, most impressive of all, a completely acoustic presentation.

The Woodoism line-up is Linus Amstad (alto saxophone), Florian Weiss (trombone), Valentin von Fischer (bass) and Philipp Leibundgut (drums). Amstad and Weiss opened, the latter muted, and then the other pair piled in, pulsingly. A bluesy sway grew for "Scruple," the rubber mute switched for a large plastic cakebox job, making a slow trawl next to Amstad's primly formed alto tone. In this combo, solos often enjoy a subtle framing provided by the other players. Weiss ditched all mutes, but puffed out the multiphonic breath for a pointed formation during "Optimism Over Despair" (penned by drummer Leibundgut). A dignified procession ensued, but without any loss of excitement. The slow-grooved "Whale Exhale" was mellow yet braced, with an easy funkin' bass solo, with singing single note progressions, the horns cooing out a surrounding sympathy. The select audience were justifiably enthused.