BY DOUG COLLETTE
November 2, 2019
Sign in to view read count 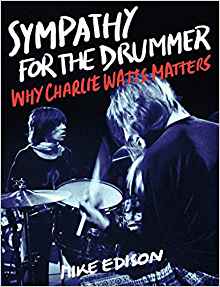 Sympathy For The Drummer: Why Charlie Watts Matters is a schizophrenic piece of work. But, as befits a book wherein the main title and subtitle could be transposed with no loss of meaning, the schism in is worth enduring because this work of Mike Edison's is ultimately so edifying.

At a glance and upon cursory perusal, this fifth book of his in part reads something a like the transcript to a lecture or podcast wherein listening ultra-carefully was compulsory because the speaker talked too fast, too loud or both. And just as hearing in real time posed a challenge to discerning all the pertinent facts and opinion(s) available, so it is with the publication.

An especially tough read in the early going, shorter rather than longer reading sessions mitigate the shortcomings in the author's speedy and often abrupt stop-and-go pace. In fact, re-reading at various junctures becomes a necessity too because he writes in great bursts of insight and information: if not exactly a veritable torrent a la the late Lester Bangs, the prose nevertheless flows thick and fast, with its density virtually equal to its rate.

Fortunately, Mike Edison's excitement and enthusiasm for his subject is the source of the occasionally daunting dual dynamic. Yet his interest in his subject is more rather than less infectious precisely because it is so effervescent, albeit occasionally to a fault; any genuine musiclover will want to glean the insight sometimes hidden in the occasional onslaught/overload. because, as the pages turn, he goes to great lengths to explain how Watts comes from a long line of great drummers including Gene Krupa, Buddy Rich and the studio stalwarts of Chess Records, like Ebby Hardy, Chuck Berry's first drummer.

To his further scholarly credit, Edison (who is a drummer himself) delves fairly deeply into the general history of jazz, folk, r&b and country drumming. He thereby illustrates the truth in the premise of Why Charlie Watts Matters clearly and vividly enough that he really doesn't need to halt himself so often, sometimes in apparent mid-thought, to repeat the phrase as means to reiterate the point. More often than not, the writer validates his admiration for the drummer of The Rolling Stones even as his wry and often broadly tongue-in-cheek prose threatens to undermine his serious intent.

Remarkably, though, such reservations about the tone of his writing more or less disappear around the mid-point of these two-hundred twenty-six pages. And, not coincidentally, that's the very point where Mike Edison adopts a more measured approach, an especially suitable place to adjust because that happens to be where Sympathy For The Drummer more explicitly turns into an examination of the Stones music on stage and in the studio. Even if this near-professorial formality is almost diametrically opposed to the style he uses early on, it turns out to be the ideal conceit by which to point out the attributes of Charlie Watts' drumming and how he's evolved as a musician and a linchpin for the music of 'The greatest rock and roll band in the world,'

In conducting this particular history lesson, Edison is remarkably objective. His discerning approach to the highs, lows and in-betweens of the band's work over the years belies his somewhat flip dismissals of other artists, including guitarist Jeff Beck and The Doors. He is likewise casual to a fault in regards to substance use and abuse in general and particularly in Keith Richards' case, but he does righteously recognize that man's candor regarding the topic in his autobiography Life (Little, Brown & Company, 2010).

The pages around one-hundred five-through one-ten contain the most colorfully graphic and, arguably, the most accurate description extant of the Rolling Stones at the absolute pinnacle of their career, circa Exile On Main Street (Rolling Stones, 1972). Notwithstanding its evanescent dignity, the writing at this interval (almost) has the visceral punch of the music even as its cerebral underpinning is undeniable, a combination of sensations that is, in fact, a direct reflection of the music and the band. In direct contrast to the early going, Sympathy For The Drummer here becomes well-nigh impossible to put down (and not because of the absolutely lubricious innuendo implied in references to the musical dynamics of 'anticipation' and 'penetration').

The chapter devoted to Some Girls (Rolling Stones, 1978), for instance, is a sterling example of how astute Mike Edison is at placing the Rolling Stones' work in both a purely musical and more broadly cultural context. His sense of humor is well-placed and illuminating as he discusses the watering down of disco for the masses. Yet he's also perspicacious as he reaffirms the iconic band's recognition of the phenomenon does not come in the form of contrivance, but an absorption of a contemporary strain of r&b the likes of which has been at the heart of their music since they formed.

Further illustrative of his progressively increased focus over the course of Why Charlie Watts Matters, the author goes to some lengths to describe the drummer's approach to the alteration of his playing style. Details include the use of the Chinese cymbal as a logical addition to an otherwise spartan drum kit, an relatively insignificant accoutrement perhaps, but one that adds musical authenticity to the likes of songs like "Miss You." Little wonder then Edison devotes so much space to the drummer's solo projects (giving short shrift to Richards' and more attention than Mick Jagger's may deserve): in his well-considered opinion, none of these drummer-centric efforts like Charlie Parker with Strings (Continuum, 1992) besmirch the Stones' legacy.

Nor do Charlie Watts' personal travails in his later years. Perhaps Mike Edison can be forgiven for his fanship—less perhaps his fanboy attitude toward Led Zeppelin's John Bonham—but the passion for his subject as expressed in Sympathy For The Drummer is one of its greatest merits. That and one other virtue the writer may or may not have intended: reaffirming the stability Charlie Watts still brings to the Rolling Stones, this writer/musician/musiclover in turn provides some great insight into the mechanics of band relationships and deftly shines light on the intricacies of individual and collective musicianship in a fascinating variety of ways.