Over the past two decades The Rolling Stones drummer, Charlie Watts, has been able to pursue his passion for jazz, playing in a variety of settings whenever he wasn't otherwise engaged with the “World's Greatest Rock 'n' Roll Band.”

In 1985, he formed a big band and toured the States, ultimately releasing Live at Fulham Town Hall on the Sony label. In 1991, he formed a small group to pay homage to the music that first grabbed him while growing up in London. In a span of five years, The Charlie Watts Quintet released a series of stellar recordings — From One Charlie, Tribute To Charlie Parker, Warm And Tender and Long Ago And Far Away.

Next came Charlie's heartfelt collaboration with Jim Keltner, The Charlie Watts / Jim Keltner Project, in tribute to their favorite drummers with each track titled after a different hero. Now we have Charlie's Tentet as recorded live at the legendary Ronnie Scott's in London on Watts at Scott's.

Warmth, joy, and virtuosity of this dream team of jazz masters as they perform live on two full CDs, a diverse collection of compositions from the likes of Duke Ellington and Thelonius Monk to originals from the Tentet themselves including Gerard Presencer's take on the Glimmer Twins in “Faction”, to two tracks culled from the aforementioned Watts / Keltner Project.

. The name of this new band refers to their first names: The ABC&D of Boogie Woogie. Show less 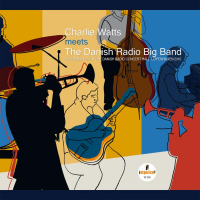 Long Ago & Far Away

All About Jazz musician pages are maintained by musicians, publicists and trusted members like you. Interested? Tell us why you would like to improve the Charlie Watts musician page.