By Greg Simmons
September 19, 2012
Sign in to view read count 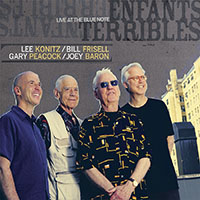 At almost 85 years old Lee Konitz can play whatever he damn well pleases on his alto saxophone, and it's a good thing he does. He may currently be making some of the most interesting music of his long career. Enfants Terribles: Live at the Blue Note teams Konitz with three first-rate musicians—all jazz stars in their own right—for an album of standards so loosely interpreted that finding the recognizable melody is a bit like a "Where's Waldo" puzzle. It's in there. Keep looking.

This record is truly detached from the structured cool of early Konitz albums like Subconscious-Lee (Prestige, 1950), with their formal, if still-swinging approach to melody and improvisation. Konitz's playing is soulful and spare, seemingly embracing Louis Armstrong's admission that in his old age he'd learned which notes to leave out. His blowing loosely slurs through his runs like flowing water.

The record opens with "What Is This Thing Called Love," but the first recognizable phrase is a nod to the godfather of modern alto saxophone, Charlie Parker, where Konitz throws in a quick fragment from "A Night In Tunisia." Yes, it's Dizzy Gillespie's composition, but Bird's 1946 Dial recording—the one with that solo—was an alto milestone (really a jazz milestone) and Konitz's pays a brief, respectful nod.

"Stella By Starlight" gets the same loose, almost free improvisational treatment, but gradually the band tightens up the tune until, at almost nine minutes in, it's playing it straight-ahead, with guitarist Bill Frisell comping Konitz's melody, while bassist Gary Peacock and drummer Joey Baron punch out a straight four-on-the-floor beat. It's exactly the opposite order jazz musicians usually pursue, gradually reconstructing rather than gradually deconstructing, and it's masterful.

Konitz exhibits a self-confident and collaborative approach, with Frisell, Peacock and Baron equally prevalent with almost constant improvisational duties. "I'll Remember April" is an impressive balancing act between almost immediate four-part improvisation and just enough of the melody to make the tune recognizable. It has an almost wave-like quality, rolling right up to oblivion, only pulling back into the tune at the last moment and averting complete collapse.

As an added bonus, Enfants Terribles is really well- recorded by Steve Remote during live shows at New York's Blue Note. The sound is warm and full with great detail. The soundstage is deep, with a good sense of the room the musicians are playing in. Natural sounding instrument timbres abound.

Enfants Terribles: Live at the Blue Note is a first-rate performance by a living legend with an exceptional band. Konitz can be forgiven for not remembering the names of his own sidemen at the end of the gig. It's great music and that's all that matters.