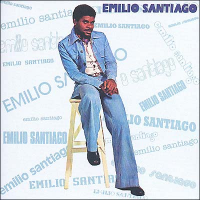 In 1975, vocalist Emilio Santiago was riding high as "The Nat King Cole of Brazil" and recording this eponymous full-length debut with some of that verdant musical nation's leading jazz composers and instrumentalists, including Joao Donato (keyboards), Danilo Caymmi (flute), Wilson das Neves (drums) and Victor Assis Brasil (saxophone). The four decades which have since passed have not tarnished this debut's warm and mellow glow.

In the opening "Bananeira" (jointly composed by Donato and Gilberto Gil), the sheer sound of Santiago's mellow voice—warm and rich and dark as gourmet coffee—immediately suggests Brazil. He delivers some notes so softly that, like butterfly wings, they seem to barely disturb the air, and swings other notes with such grace that they land near the jazz end of Nat King Cole's smooth style. He sings the lines to "Quero Alegria" so subtly that they sound almost spoken, and the gorgeous arrangement pulls in strings to dance at the end of each line, and then wrap up and close around them like a sleeping flower. It's not difficult to imagine Cole and Santiago dueting through the elegantly orchestrated pop of "Depois."

Afro-Cuban percussion and Latin jazz piano pop right up to kick out "La Mulata" as a chic little cha-cha, a rhythmic bounce continued in "Nega Dina," which strongly foreshadows contemporary Brazilian jazzsters BossaCucaNova. The only English lyric of the set, "Brother" rumbles on a swaying, R&B horn chart to wonder and sing about universal love, unity, and the friendship of one very special soul brother.

Emilio Santiago saves its two most extended pieces for last. "Doa A Quem Doer" radiates a sunny glow and optimistic sense of summer that your ears can once again easily imagine Cole swinging through. "Sessão Das Dez" reflects the face of Antonio Carlos Jobim's lushly romantic "Bonita." It opens with quiet acoustic guitar and voice, and the absence of bass or drums allows these opening verses to feel like they're floating; then, piano, saxophone and guitar slowly convene and hover around Santiago's voice like whispering ghosts, before the rhythm section and pianist walk out the ending in a bluesy jazz stroll.

The short playing time of this set makes it no less sweet.