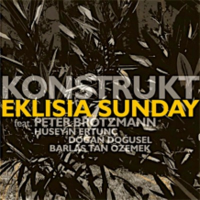 The Turkish free jazz outfit Konstrukt might be considered the most evolved improvisational band working in jazz today. Founded, not in the hotbeds of jazz, London, New York, Chicago, Wuppertal, or Krakow, their isolation is the key to their success.

Although this band was formed in 2008, their free jazz ears date back to the 1960s. The band has absorbed the lessons of John Coltrane's Interstellar Space (Impulse!, 1967), Peter Brötzmann's Machine Gun (FMP, 1968), and more recent works by Ivo Perelman, William Parker, and Joe McPhee.

This live disc was recorded in May 2011 in Gümüşlük, Turkey, and reunites the quartet with Peter Brötzmann, their guest from a 2008 recording Dolunay (re:konstruKt, 2010). The quartet's basic lineup of Korhan Futaci (saxophone), Umut Çağlar (electric guitar), Özün Usta (bass), and Korhan Argüden (drums) is augmented here by an additional bassist, guitar, piano, and saxophone.

That said this large-ish ensemble, to KonstruKt's credit, makes much more than noisy energy jazz. The music is presented in four lengthy parts, each with a nuggets (maybe blocks) of artful music making. The disc opens with a saxophone (I'm guessing it's Futaci) wandering among his quartet before Usta's djembe drum sets the pulse. While the large ensemble slowly joins in, the structure of the piece remains. A coherent groove and consistent energy is sustained, as the piece burns itself into exhaustion, some gentle guitar notes are played over delicate reed work. The longest piece, "Part III" (22:36) is a nomadic opus. The piece sustains a shamanistic energy through percussion, bells, double electric guitars, and ever-spiraling- upward saxophones. The rhapsodic vibe throughout organizes and highlights this excellent date.