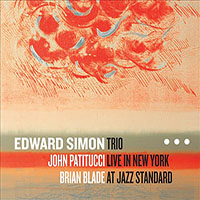 Some artists maintain a busy release schedule, putting out an album a year—sometimes, in the case of musicians like guitarist Bill Frisell, even more frequently—while others, for a variety of reasons, are less prolific. Pianist Edward Simon has, in recent years, been issuing albums with broader distribution under his own name—which automatically discounts 2010's independently released but undeniably fine Danny Boy—about once every three years on labels ranging from The Netherlands' Criss Cross to Italy's Cam Jazz. Live in New York at Jazz Standard is the third in a consecutive string of recordings to feature his seven year-old trio with bassist John Patitucci and ubiquitous drummer Brian Blade, but it's both his first live recording and the first to be issued on the American Sunnyside imprint. Sometimes, making your fans wait is a good thing; in this case, Simon's set, recorded at New York's Jazz Standard—drawing primarily from Unicity (Cam Jazz, 2006) and from Poesia (Cam Jazz, 2009), but also containing a surprise or two—has unequivocally been worth the wait, and continues to position the ever-inventive pianist as one of his generation's most watch-worthy.

In a recent discussion with Richie Beirach, the pianist suggested that one of the characteristics of "real improvisers" is being motif-driven and, while his statement might be a controversial one that will engender plenty of discussion and debate, it certainly fits Simon's approach. Whether soloing in the somewhat more constricted (time-wise) confines of the recording studio or stretching out as he does here, Simon has always been a thoughtful player whose solos often build from evolving motifs; cerebral, even, but as evidenced on tunes like the irregularly metered, Latin-esque "Pere"—the modal set-closer, drawn from a much earlier collaboration with saxophonist David Binney, Afinidad (RED, 2001)—the pianist proves that music of the head need not preclude the heart, as his solo builds, carefully, considerately, inevitably, to its climactic conclusion before settling into an ostinato-based feature for Blade, a name for whom the term "incendiary" has always been a synonym. Dynamic, but peppered with thunderous crashes and audible whoops and hollers, Blade's as unfettered as it gets—a player, in some ways, the antithesis of Simon in his almost entirely instinctive approach—and, perhaps, the very reason they work so well together.

Patitucci—whose early years were spent largely in fusion and near-smooth jazz territory with artists like pianists Chick Corea and David Benoit, and saxophonist Eric Marienthal—has completely reinvented himself over the past decade, largely through his work in saxophonist Wayne Shorter's quartet (also with Blade), heard recently on the exploratory excellence of Without a Net (Blue Note, 2013). Here, he proves himself equally imaginative, whether swinging with unrelenting fervor on Simon's set-opening title track from Poesia, or contributing soaring arco to the more abstract terrain of the pianist's "Pathless Path," from Unicity, stretched here to nearly three times its original length. Bookended by a first-time look at Antonio Carlos Jobim's "Chovendo na Roseira"—beginning with an a cappella pizzicato solo from Patitucci that leads to a more pulse-driven but still ethereal reading, only settling into more recognizable reverence halfway through its nearly 14-minute duration—and Simon's ambling take on saxophonist John Coltrane's change-driven rite of passage, "Giant Steps," first heard on Poesia, "Pathless Path" becomes the dramatic centerpiece to Live's hour-long set.

Simon remains a busy player, in particular with his ongoing work as a member of the SFJAZZ Collective, last heard live and on record performing the music of soul legend Stevie Wonder, and in the Ninety Miles (Concord, 2011) touring band, with vibraphonist Stefon Harris, saxophonist David Sanchez and trumpeter Nicholas Payton (replacing the album's Christian Scott aTunde Adjuah), which clocked considerable road time in 2012 includinga terrific stop at the TD Ottawa Jazz Festival. He may not release his own albums as often as some might like, but when a record like Live in New York at Jazz Standard comes along—a stellar date that combines head and heart, mainstream and more eclectic concerns, and appealing, broad-reaching originals with distinctive arrangements of well-known standards, all played by a trio clearly at the top of its game—then all is forgiven and, while waiting for Simon's next release, there's a growing discography with one more fine entry to return to, time and again.