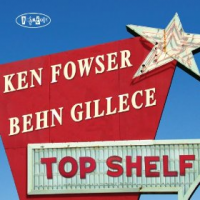 The team of tenor saxophonist Ken Fowser and vibraphonist Behn Gillece has been steadily releasing music of a similar nature on the Posi-Tone label since its 2009 debut, Full View, hit the shelves. With this, the duo's fourth album, Fowser and Gillece continue along the same path with nary a stylistic sharp turn, yet this one manages to stand out because of one important difference: a third man out front. The three previous recordings were leaders-and-rhythm dates but, with Top Shelf, the group opens the frontline door, inviting trombonist Michael Dease to join in.

The vibes-saxophone-trombone combination puts a slight aural twist on the formula that's been at the heart of previous outings. Greater tonal and timbral complexity naturally comes to the fore with a trombone at play, and Dease's skills as a soloist add volumes to this album; his horse neigh arrival and triplet excursions on "Due Diligence," for example, steal the show. Every solo has head-turning potential, but the trombonist is, in some respects, underutilized; the presence of another frontline personality could have been cause for Gillece and Fowser to significantly expand their arranging/composing vision(s), but they don't take the bait.

Instead, Fowser and Gillece continue to deliver swinging tunes and straight-eighth vehicles that bound along with enthusiasm and glee. Gillece remains the primary composer in this partnership, contributing seven of the album's ten tunes, but Fowser also adds a few numbers to the playlist. The peppy "Pequenina," with Dease and the leaders at the center of the action, and lightly drifting ballad, "For The Moment," housing gorgeous rubato harmonic rainbows, prove to be Gillece's best, standing apart from the rest in style and syntax. Fowser's finest is the title track, a blues with a Latin rhythmic foundation that contains some strong solo work.

Top Shelf doesn't necessarily break new ground for this duo, but it does find them in good form and good company, with Dease and a strong rhythm section onboard for a fun-filled ride.