Duke Ellington: My People - The Complete Show and The Treasury Shows, Volume 16

By CHRIS MOSEY
September 21, 2012
Sign in to view read count
Duke Ellington stood aloof from the Civil Rights movement. As a self proclaimed patriot he was extremely uneasy about the street protests and civil disobedience sweeping America the 1960s. He didn't participate in Martin Luther King's 1963 Great March on Washington.

He would deal with the issue his way, he said, and went to Chicago to put the finishing touches to a show, My People, which would celebrate 100 years of black emancipation.

Expectations were not high. Ellington was seen as an Establishment man. One of many manifestations of his intense patriotism had been a series of radio broadcasts made in the 1940s for the US Treasury to boost its war bonds, rechristened "victory bonds" as the conflict drew to a close. Ellington took to the microphone himself to plug the bonds, wrote "Victory Drive" for Joya Sherrill to sing and had his band play "The Star Spangled Banner."

However, while he loved his country madly, Ellington suddenly realized in 1963, as he worked on My People, that now was the time to stand up and be counted. He wrote a song like nothing he'd ever written before. "King Fit The Battle of Alabam" tells in graphic detail how in Birmingham, Alabama, white police chief Eugene "Bull" Connor loosed dogs and turned fire hoses on peaceful black demonstrators.

It was the strongest political statement Ellington had ever made musically and with it, he redeemed himself in the eyes of his fellow Afro-Americans. 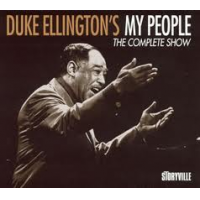 My People: The Complete Show

Ellington lulled his audience into a false sense of "business as usual" before giving vent to his gentlemanly howl of rage. The show opens with "Jungle Triangle," harking nostalgically back to Cotton Club days and featuring the congas of Emmanuel Rahim. Then there's a "spiritual section," starting with a version of "Come Sunday" featuring vocals by the Irving Bunton Singers and Jimmy McPhail.

In "Will You Be There?" and "Ain't But The One" Ellington continues to meditate peacefully on his relationship with The Lord. So too in "David Danced," a jazzed-up version of "Come Sunday" featuring a tap dance by Bunny Briggs that would be a cornerstone of later "sacred concerts."

After "Heritage (My Mother, My Father And Love)," a self congratulatory, sentiment-laden celebration of his childhood narrated and sung by Joya Sherrill, things can only get better. Which they do with a rip-roaring "blues section" that includes a great vocal from Lil Greenwood on "Walking and Singing The Blues."

A second version of "Jungle Triangle" leads into "King Fit The Battle of Alabam." The song is, of course, based on the old spiritual, with King taking the role of Joshua. It is a stunning highlight of the show, a firecracker of a song that makes you wish Ellington had gotten angry more often.

Joya Sherrill handles the trite narration of "Purple People" (not her daughter, Richelle Le Noir Guilmenot, as stated in the notes). Then Ellington brings the show to a close with the self-explanatory "What Color Is Virtue?"

"Bonus" tracks include Billy Strayhorn's "Strange Feeling." Intended for the "blues section" but never used, it features some fine saxophone by Harold Ashby. But beware the closer: an alternative take of the gruesome, schlocky "Heritage," this time with Jimmy McPhail's vocal. 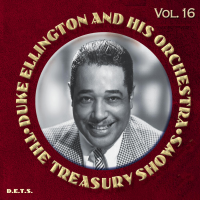 Duke Ellington and His Orchestra

The Treasury Show records provide an excellent snapshot of the Ellington outfit as a working band in the 1940s and include unfamiliar material Ellington didn't use in his regular repertoire, such as Harry Carney's "Jennie" and "Crosstown" and "The Wonder of You," penned by Johnny Hodges, the latter with lyrics by Don George.

"Dancing In The Dark," from the show The Bandwagon, arranged by Billy Strayhorn, is the only surviving recording of the song featuring the powerful soprano of Kay Davis, who died, aged 91, as this album was in production.

ADVERTISEMENT
Then there's the trivial but fun "11.60pm," featuring the joyous Sherrill. It's followed by the title song of the undistinguished film "Tell It To A Star," a vehicle for Rex Stewart's magnificent cornet.

"I Ain't Got Nothing But The Blues" by Al Hibbler and Kay Davis made Billboard's Harlem Hit Parade, which later became the R'n'B chart.

There are a few wartime curiosities. The cautionary "A Slip Of The Lip (Could Sink A Ship)" was written by Ellington's son Mercer Ellington, who was in uniform at the time. "Hayfoot, Strawfoot" refers to the bizarre practice of attaching straw and hay to the boots of soldiers from rural areas to help them distinguish between left and right when drilling.

There are all the usual idiotic condescending remarks from the announcer and—still worse—vocal interludes from the Mellotones. But many gems make up for such indignities, none more so than a terrific version of "Jack The Bear" which Ellington wrote for Jimmy Blanton. It features here that other great, innovative Ellingtonian bassist, Oscar Pettiford.

My People: The Complete Show

Tracks: Jungle Triangle #1; Come Sunday; Will You Be There; Ain't But The One; David Danced; Heritage (My Mother, My Father And Love)# 1; After Bird Jungle; Montage; My People (Soap Box); The Blues Ain't; Blues At Sundown; Walking And Singing The Blues; Working Blues; My Man Sends Me; Jail Blues; I Love My Lovin' Lover; Jungle Triangle #2; King Fit The Battle of Alabam; King; Purple People; What Color Is Virtue; Purple People (instrumental); Piano Blues Overture; Strange Feeling; Heritage (My Mother, My Father And Love) #2.