In the early 1940s, Duke Ellington discovered a seventeen year old with remarkable poise and singing ability. Joya Sherrill worked with Duke Ellington for a short spell in 1942 and, after writing the lyrics to Take the “A” Train, joined his band in 1944. Rejoining the group, Sherrill scored a major hit with “I'm Beginning To See The Light.” She stayed with Duke Ellington's jazz band well into the fifties and is generally considered to be one of the finest (and smoothest) jazz vocalists of that era.

She married Richard Guilmenot in 1946. After years with Ellington she became a solo singer but returned to the band to perform in the television program A Drum is a Woman (1956). Sherrill toured the USA in 1959, appearing in nightclubs and at army bases, then took an acting role in a Broadway play. She went to the USSR with Benny Goodman (1962), performed and recorded with Ellington in Chicago (1963), and also recorded two albums as a leader (1960, 1965). Ellington had a high regard for Sherrill, whose diction and articulation he considered excellent.

Twenty years later, Joya Sherrill turned up as the host of a fondly remembered children's program broadcast on WPIX channel 11 in New York. One of Duke Ellington's last TV appearances was on this show. 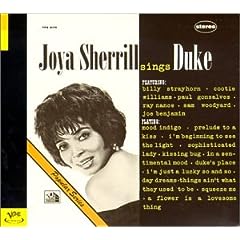 All About Jazz musician pages are maintained by musicians, publicists and trusted members like you. Interested? Tell us why you would like to improve the Joya Sherrill musician page.