By JOHN KELMAN
September 16, 2009
Sign in to view read count 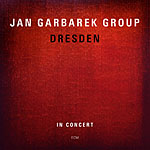 Though less active on the recording front in recent years—In Praise of Dreams (ECM, 2004) was his first since Mnemosyne (ECM, 1999), following up his immensely popular pairing with the Hilliard Ensemble, Officium (ECM, 1994)— Jan Garbarek has toured virtually every year, playing dates in Europe and further abroad. His 2008 Mai Jazz performance, in Stavanger, Norway, proved that, despite unfounded accusations of leaving jazz behind, the iconic Norwegian saxophonist is still capable of turning up the heat and blowing with the best of them. Labels have long become meaningless when describing Garbarek's music, but Dresden—his first live album, recorded in the fall of 2007— faithfully captures the saxophonist and his current quartet with a two-hour set that traverses a broad dynamic and stylistic expanse, with plenty of space for everyone to stretch out.

He may have largely left anything resembling conventional jazz years ago (though his performance of Carla Bley's "Syndrome on bassist Eberhard Weber's Stages of a Long Journey (ECM, 2007) proves he can still swing hard when he chooses to), but there are trace elements of conventional jazz harmony on Garbarek's lengthy look at Milton Nascimento's "Milagre Dos Pieces," which features a vivid piano solo from longtime band mate Rainer Bruninghaus, surely one of jazz's more undervalued players. Garbarek's own gentle "There Were Swallows," one of three tracks taken from Twelve Moons (ECM, 1993), also possesses unmistakable hints of the vernacular, even as it's subsumed with unmistakable classicism and Garbarek's ever- present, keen attention to the absolute purity of every note.

With much of the material documented in record for the first time, Garbarek also looks to the repertoires of artists with whom he's recorded over the years. He completely reinvents the drum machine-driven "Paper Nut," from violinist Lakshminarayana Shankar's Song for Everyone (ECM, 1985), turning it into a high octane set- opener that's powered by drummer Manu Katche's visceral, pseudo-shuffle groove and features an early knock-down, standout solo from the saxophonist that, in its tension-building movement inside and outside its harmonic core, demonstrates he's still the same saxophonist that recorded albums like Sart (ECM, 1971) and Afric Pepperbird (ECM, 1970)—he's just shifted his contextual focus.

There's plenty of Garbarek's atmospheric, Norwegian traditionalism on tunes like Twelve Moon's "The Tall Tear Trees," which may ultimately lead to a lyrical feature for relative newcomer, bassist Yuri Daniel, but still possesses the vivid imagery of Dis (ECM, 1977). Garbarek reworks his synth and hand drum- driven "Once I Wished a Tree Upside Down," from percussionist Trilok Gurtu's Living Magic (CMP, 1991), into a more buoyant and joyfully Latin-esque piece, again driven by Katché's unshakable groove and richly tuned kit.

Closing the set with an extended, surprisingly funky "Voy Cantando," from Legend of the Seven Dreams (ECM, 1988), Garbarek fashions a solo that's characteristically spare but aims deep into the heart with a combination of gritty multiphonics, visceral wails, and considered virtuosity. If ever there were doubts about Garbarek's improvisational prowess, the paradoxically potent yet ever-elegant Dresden should lay them all to waste.