John Burnett Orchestra: Down For Double 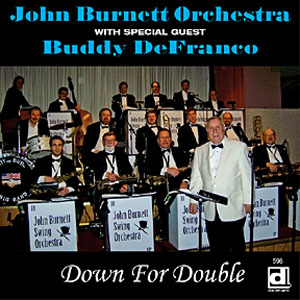 The John Burnett Orchestra is a formidable swing band because, while there's undoubted reverence in their evocations of the era, that reverence is tempered by sparks of originality. Indeed, the tight-but-loose thing which summarizes its collective sound is now pretty hard to come by, which makes this release a cause for celebration.

When the band's joined by clarinetist Buddy DeFranco on the warhorse that is "Sing Sing Sing" it's impossible to keep from smiling in view of how the balance between the reverential and the life-affirming is finely struck. In terms of dynamics there isn't much that's truly striking going on, but that's not the point. This is a band which chews up the charts, even while it doesn't go in for the kind of all-out bombast that would bring the house down for all the wrong reasons. Throw in solos by DeFranco and tenor saxophonist Frank Catalano, and the result is a heady brew.

The group's take on Duke Ellington's "Cotton Tail" strikes a fine balance again, despite inevitably failing to scale the same heights of the original. This is no one's fault, but, rather, a testament to the inimitable and indefinable nature of Ellington's music.

A similarly indefinable thing applies to anything that the Count Basie band laid down for posterity, causing readings of "The Heat's On," "One O'clock Jump" and the title track to lose out by comparison. Still, this is a band which knows the swing idiom inside out, ensuring that it generates enough momentum on "One O'Clock Jump" to carry itself into the White House.

"Wind Machine" is another Basie tribute which hits the spot, thanks in no small part to a tenor sax solo from Lennie Roberts and the work of drummer Bill Byan, who appropriately evokes the spirit of Sonny Payne.

Ellingtonia is the order of the day again on "In a Mellow Tone," which finds the reeds sounding particularly creamy, even while proceedings are underscored by a measure of grease to keep things easy.

On a practical point it should be noted that the personnel provided here is for the band's current lineup. It's listed in the accompanying booklet, but isn't properly reflective of the artists actually performing on the disc.

In the Mood; In a Mellow Tone; Basically Blues; The Heat's On; Down For Double; One O'clock Jump; Wind Machine; West Side Story; Cottontail; Sing Sing Sing; Out of Nowhere; The Blues.