Sonny Payne was an American jazz drummer, best known for his work with Count Basie and Harry James.

From 1950 to 1953, Payne played with Erskine Hawkins' big band, and led his own band for two years, but in late December, 1954, he made his most significant move, joining Count Basie's big band for ten years of constant touring and recording. He was originally asked only to temporarily fill in for Basie's ailing regular drummer, but Payne's skillful playing was such a hit with audiences and the band that he was immediately hired to be Basie's permanent drummer.

From Count Basie’s autobiography: “Sonny Payne came in there, and right away he touched off a new spark in that band, and we had to keep him . . . but I wouldn’t say that showmanship was what made the difference. It was not that easy. You can’t see any stick twirling and trickerlating on those next records, but you can hear and feel a difference in the band.”

He left Basie in 1965, leading his own trio and touring with Illinois Jacquet in 1976. He was Frank Sinatra's personal drummer for all of the singer's appearances with the Count Basie Orchestra in 1965 and 1966; in fact, whenever Sinatra sang with Basie in the 1960s, Payne was the drummer. He rejoined Basie as the regular drummer (several months from 1965–1966) and later at his wife's urging (1972–1974). Most of the rest of his career, however, was spent in the Harry James big band, which he joined in December, 1966. He was overseas in Brazil with the Harry James band in December 1978. Upon his return to the US in early January 1979, he contracted the flu and died of pneumonia at the age of 52.[3] When he was dying in the hospital, Harry James paid all of his medical bills and subsequent funeral costs.

Harold Jones, Count Basie's regular drummer from 1967 until 1972, told an interviewer, "I am proud to say that I took everything that I could from Sonny Payne." Butch Miles, Basie's regular drummer for a total of 15 years starting in 1975, told an interviewer, "I took a lot of my cues and a lot of my drumming style from Sonny Payne.

When I first joined the band I knew, I knew everything that he had played, so we'd get to a certain point, I'd just play what Sonny had played and it worked." Miles also said, “I memorized all of Sonny Payne’s licks. I tried ‘em, and they worked.” In the early 1990s after Count Basie's death, leader Frank Foster was auditioning a young drummer for the Basie Band. Foster asked the drummer to come back for another audition in six months after the young man had listened to every recording he could find of Sonny Payne drumming with Count Basie. Show less 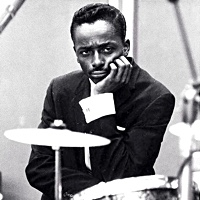 All About Jazz musician pages are maintained by musicians, publicists and trusted members like you. Interested? Tell us why you would like to improve the Sonny Payne musician page.