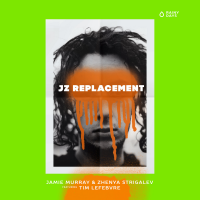 Visceralism and virtuosity, the two qualities which define this momentous debut album by JZ Replacement, make an unbeatable combination. They are also a necessary one. Without a degree of virtuosity, eloquence is constrained by lack of vocabulary. Without a degree of visceralism, technical facility is at worst mechanistic, at best purely cerebral. Bring the two qualities together and the result can be special.

JZ Replacement—a duo comprising alto saxophonist Zhenya Strigalev and drummer Jamie Murray—achieves an ideal blend of visceralism and virtuosity. The two musicians have been frequent collaborators on London's thriving jazz scene since 2018, but this is their first album together as a unit. They are joined, in what is essentially a supporting role, by American bass guitarist Tim Lefebvre, with whom Strigalev has toured and recorded since the early 2010s. The group excels on a helter-skelter ride through 35 minutes of jittery, serpentine and often furiously paced material, executing its tricky contours with passion and precision.

Contrary to what the sleeve art and title might suggest, there is nothing ugly or knuckle-scrapingly punkish about Disrespectful. It is no simple head-charge, though at times it does resemble one. Much less is it on the spectrum free-improv. There is little use of dissonance. All seven Strigalev tunes have form and structure, to which Murray adds danceable beats. There are neo-balladic moments. There is light and shade. The album is a listener-friendly romp with historical resonances which include Jackie McLean, Ornette Coleman, Arthur Blythe, electric-era Miles Davis and splashes of Slavic folk music, and which also references contemporary sounds such as broken beat, hip hop and electronica (post-production effects were judiciously applied by Strigalev and his co-producer, Eugene Petrushanskiy).

Disrespectful is strikingly different from, but on the same side of the barricades as, other ranking saxophone and drums duos such as Londoners Binker Golding and Moses Boyd, and American drummer Ted Poor's duo with alto saxophonist Andrew D'Angelo. Like both those groups, JZ Replacement offer thrilling and deeply satisfying music for head, heart and feet. Not to be missed.